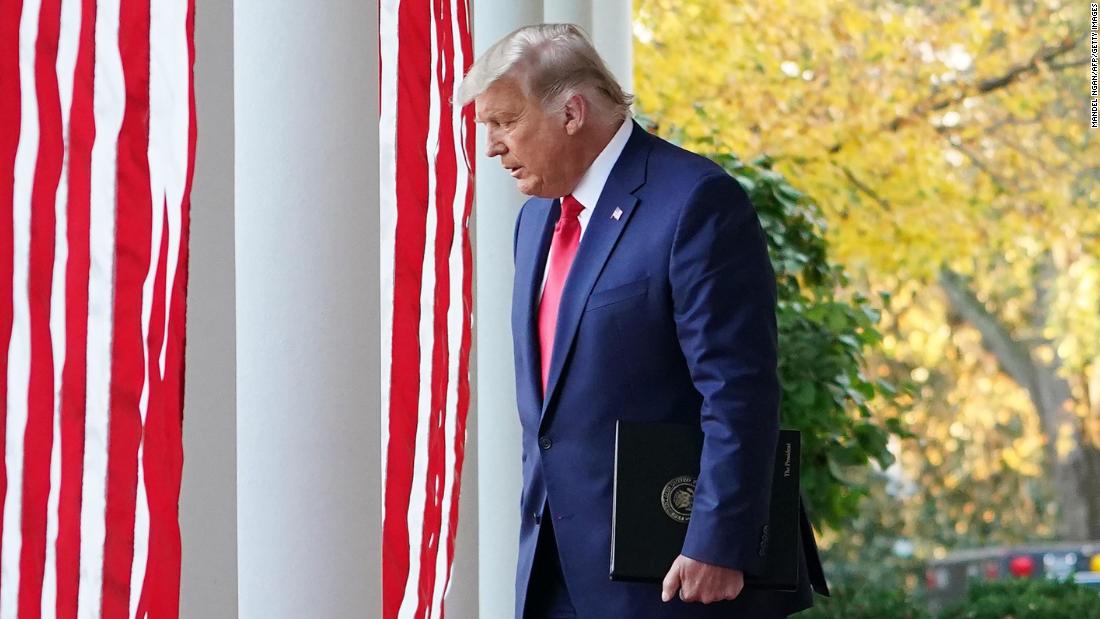 The revenge firing, the President’s latest assault against the infrastructure of US democracy, comes as he refuses to accept his defeat and to begin the process of transitioning power to President-elect Joe Biden — an impasse that is especially dangerous amid a worsening pandemic.
Trump wrote that he terminated Chris Krebs, a senior Department of Homeland Security official, for contradicting his own baseless allegations of irregularities. The President, his campaign and political allies have made multiple efforts, which started well before the election, to falsely argue that he was cheated out of a second term. His effort appears motivated by a desire to explain away his clear defeat by the former vice president but is also part of a pattern of behavior designed to discredit Biden’s presidency and to enshrine national divides that he consciously widened as a tool of power.
In other apparent attempts to cast doubt on the integrity of the election — unprecedented in modern history — Trump ally Sen. Lindsey Graham was embroiled in a controversy after calling election officials in Nevada, Arizona and Georgia — three key states won by Biden — to question them on procedures for mail-in ballots, which generally favored Biden. And two Republicans broke with tradition in Michigan, another state where the Democratic nominee triumphed, in temporarily blocking the certification of the election in Wayne County, where Biden beat the President. Michigan’s Secretary of State Jocelyn Benson, a Democrat, later told CNN’s Chris Cuomo that the officials relented and agreed to certify the vote.

The latest maneuvers by Trump and his allies came as more of the President’s long-shot legal challenges and threadbare cases alleging election fraud were exposed in the courts.

The President’s latest Hail Mary attempt to overturn the election result in one of the multiple states won by Biden came unstuck, this time in the Pennsylvania Supreme Court.

The Keystone State’s top bench ruled that there was nothing in state law requiring ballot observers to stand within six feet of vote counts as the Trump campaign had argued. The decision undercuts the President’s claim his supporters were unfairly discriminated against and that therefore the results in Pennsylvania, where Biden won by tens of thousands of votes, should be ruled invalid.

In a separate Pennsylvania case, Trump’s lawyer Rudolph Giuliani stepped in to lead a chaotic legal effort trying to prove that Democrats committed election fraud over absentee ballots. Other judges have previously rejected such claims.

Another of Trump’s all but non-existent openings to change the election result championed by conservative media also appeared to be closing.

An election audit in Georgia was expected to finish by Wednesday ahead of the official certification of the ballot on Friday. Officials said the results were largely tracking original tallies that handed victory to Biden, further tarnishing Trump’s claims of widespread fraud.

As more and more states begin to certify their election results in the coming days, the already minuscule rationale for Trump and the White House to perpetuate the fiction that he won a second term will further recede.

There are so far no signs that Republican state legislators in some key states are ready to fulfill the hopes of some conservative pundits that they will disregard the will of voters and select pro-Trump delegations to the Electoral College.

Trump’s setbacks in his struggles to overturn the results comes as he has all but retreated from public view.

CNN’s White House team reported on Tuesday that the increasingly reclusive commander in chief — who once couldn’t bear to cede the limelight — is locked in a “bunker mentality.”

In no mood to party, Trump has decided to forgo his normal Thanksgiving trip to his Mar-a-Lago resort, administration officials told CNN, and he has had no public engagements for days.

But even an invisible, lame-duck President retains the power to change the world that his successor will confront. So, Trump’s acting Secretary of Defense Christopher Miller announced Tuesday that thousands of troops would be pulled out of Afghanistan and Iraq, as first reported by CNN’s Barbara Starr the day before. The move prompted a mixed reaction from Capitol Hill, but notably drew criticism from Republican Senate Majority Leader Mitch McConnell.

Another senior Republican senator, John Cornyn of Texas, issued a scathing statement about the move, saying that it came without any real consultation with US allies, NATO or Congress and would draw down troops to “a potentially unstable and dangerous level.”

The decision fulfilled one of the President’s political goals but will spark fears of a Taliban resurgence in Afghanistan. It also went against the advice of US commanders who worry about the strength of the democratic government in Kabul.

The redeployment announcement was just one of what are expected to be a series of aggressive plays by the President — possibly including moves on Iran and China policy — and attempts to tie Biden’s hands when he is President. Trump’s use of his power to make such significant moves while refusing to explain them to the American people as he stays out of sight, and the impression that he is exacting vengeance for a defeat he will not accept, are likely to further undermine his position.

The potential cost at home of the President’s obstinacy and failure to sign off on millions of dollars of transition funding, access to government agencies and briefings for Biden’s team is becoming ever more clear.

Hugely encouraging news about the efficacy of Covid-19 vaccines expected to be available to all Americans next year cannot disguise growing anxiety among medical experts at the failure to read the next administration into the program.

The vaccine effort will be one of the most complicated logistical and public health undertakings ever. Any delays in manufacturing and distributing the vaccine could result in thousands of unnecessary deaths.

Growing desperation about the worsening human toll of Covid-19 prompted several big US medical groups to call for cooperation between the outgoing and incoming administrations on Tuesday.

“All information about the capacity of the Strategic National Stockpile, the assets from Operation Warp Speed, and plans for dissemination of therapeutics and vaccines needs to be shared as quickly as possible to ensure that there is continuity in strategic planning so that there is no lapse in our ability to care for patients,” said the American Hospital Association, the American Medical Association and the American Nurses Association in a joint letter to Trump.

In a sign of the complexity of the task ahead, a Government Accountability Office review of the Trump administration’s vaccine effort found several choke points that could slow the approval and distribution of vaccines.

And the government’s top infectious diseases expert, Dr. Anthony Fauci, who has been marginalized by the President, stressed that presidential transitions are vital.

“If you don’t have a smooth transition, you would not optimize whatever efforts you’re doing right now,” Fauci told CNN’s Jim Sciutto.

Trump’s neglect is having a devastating impact as hospitalizations from Covid-19 reach record levels and the virus blasts through Midwest and Mountain West states where Republican governors and voters bought into Trump’s minimization of the pandemic and contempt for masks and social distancing.

Biden, who has called Trump’s failure to concede and to open a formal transition of power an “embarrassment,” is pressing on with his efforts to prepare his administration. In Wilmington, Delaware, on Tuesday the former Vice President consulted US national security experts and former military brass. The group included retired Gen. Stanley McChrystal, who resigned during the Obama administration after Rolling Stone magazine reported remarks in which he criticized the former vice president.

Biden said that it would be preferable to have access to the normal intelligence briefings that Presidents-elect enjoy. But he is promoting an image of a commander in chief who is ready to get to work.

Capitol Hill Republicans are still unwilling to confront the President on his refusal to permit a graceful transition. But increasingly there are signs that the natural transfer of power — if it is not happening formally — is under way.

Florida Sen. Marco Rubio referred to Biden as President-elect this week. McConnell has made a career of not getting his caucus out ahead of political conditions, but he also gently recognized inevitability of what is to come.

“We’re going to have an orderly transfer from this administration to the next one,” McConnell said. “What we all say about it is, frankly, irrelevant.”

Even noting such minor rhetorical shifts highlights the President’s outlandish behavior and his own party’s willingness to confront it. But it is a sign that reality is also coming into focus.