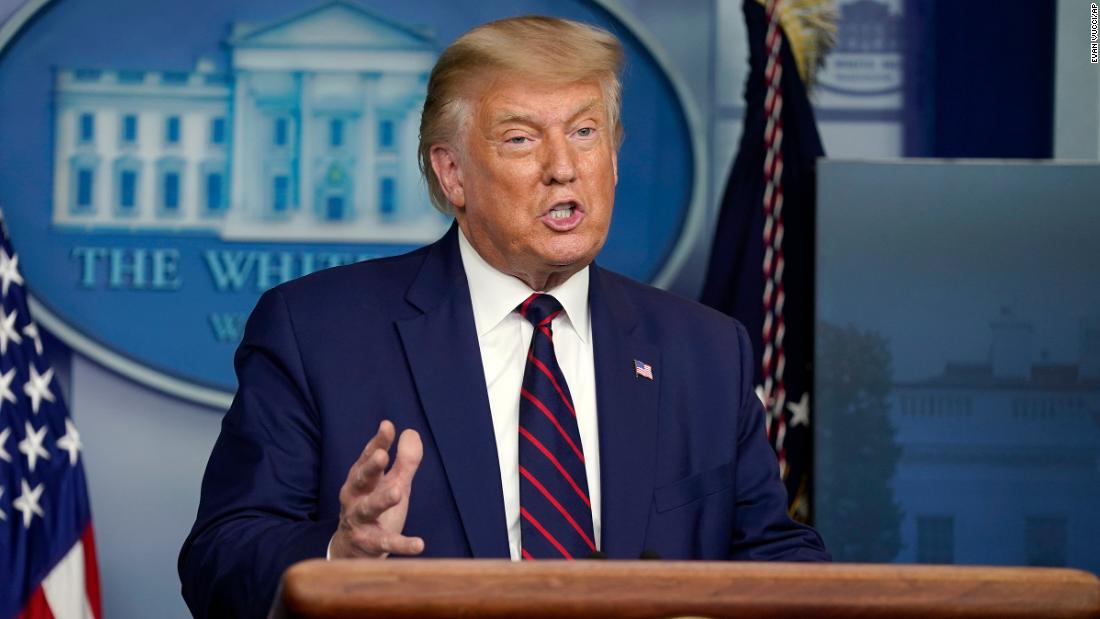 In a Sunday morning tweet, the President said the US Department of Education would investigate whether California schools are using the New York Times’ “1619 Project” in public school curriculum. The Pulitzer-Prize winning collection reframes American history around the date of August 1619, when the first slave ship arrived on America’s shores.

“Department of Education is looking at this. If so, they will not be funded!” he wrote on Twitter, citing a message from an unverified account saying it was being taught in schools there.

Like that memo, it’s unclear the extent of the phenomenon the President is identifying. Some schools have said they will adopt the 1619 Project into their lessons — though how many isn’t known.

The 1619 Project was launched by the New York Times Magazine last year. After the launch, the Pulitzer Center was named an education partner for the project and announced its education team would develop educational resources and curricula for teachers to use. The 1619 Project curriculum is available online for free through the center.

Arkansas Sen. Tom Cotton, a Republican, has introduced legislation that would prevent schools from teaching the curriculum. The legislation, titled the Saving American History Act of 2020, “would prohibit the use of federal funds to teach the 1619 Project by K-12 schools or school districts. Schools that teach the 1619 Project would also be ineligible for federal professional-development grants.”

The legislation appears unlikely to gain any significant traction in the Senate but stands as a way for Cotton to send a message.

The moves follow a pattern by the President of disparaging attempts to process or reckon with the country’s fraught racial history. In his convention acceptance speech, the President said “Americans are exhausted, trying to keep up with the latest lists of approved words and phrases, and the ever more restrictive political decrees. Many things have a different name now, and the rules are constantly changing.”

“We want our sons and daughters to know the truth,” Trump went on. “America is the greatest and most exceptional nation in the history of the world. Our country wasn’t built by cancel culture, speech codes, and crushing conformity. We are not a nation of timid spirits.”

Trump has also sought to draw contrast with Democratic presidential nominee Joe Biden in the months before the election. Trump has vowed to protect monuments, including those dedicated to Confederate figures, called the phrase “Black Lives Matter” a “symbol of hate” and threatened to withhold funding from cities in blue states that he says are permitting unrest in the streets.
The President and Attorney General William Barr have said that they don’t believe systemic racism exists in the United States.
In an exclusive interview that aired Sunday with CNN’s Dana Bash, Democratic vice presidential nominee Kamala Harris rebuked Trump and Barr’s comments regarding systemic racism in the US, saying they are “spending full time in a different reality.”

“We do have two systems of justice” for Black and White Americans, Harris told Bash.

The comments from the first Black and South Asian American woman on a major party presidential ticket come less than two months before the November election in which Harris suggested Trump was not a “real leader” on racial justice.

“I don’t think that most reasonable people who are paying attention to the facts would dispute that there are racial disparities and a system that has engaged in racism in terms of how the laws have been enforced,” said Harris, a California senator and former state attorney general. “It does us no good to deny that. Let’s just deal with it. Let’s be honest. These might be difficult conversations for some, but they’re not difficult conversations for leaders, not for real leaders.”