Trump’s Clemency Came After Displays of Loyalty by Stone 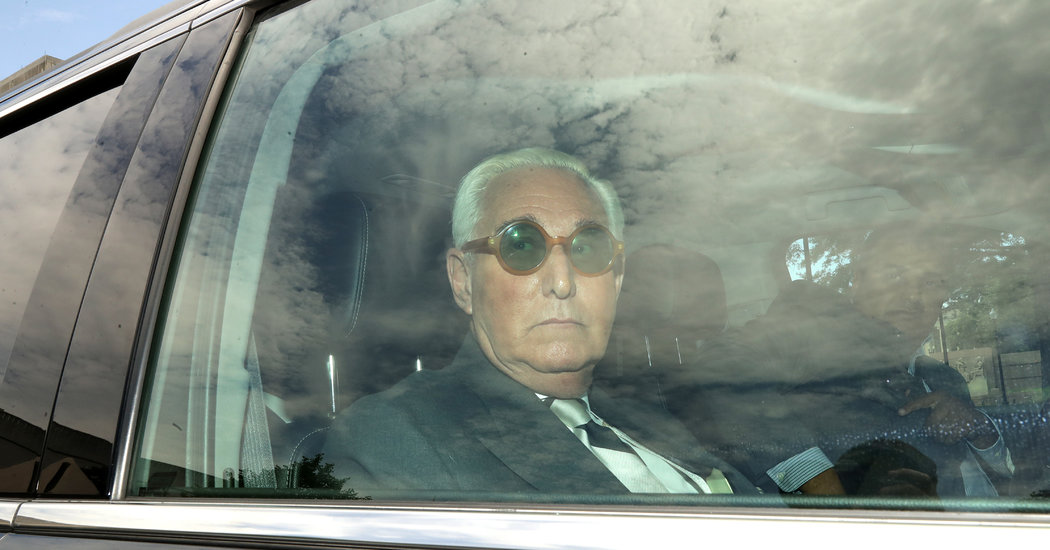 Months before F.B.I. agents arrived in darkness at his Florida home to take him into custody, Roger J. Stone Jr. promised that he would remain loyal to his longtime friend. “I will never roll on Donald Trump,” he said.

He did not, and Mr. Stone is now a free man.

The president’s decision on Friday to commute Mr. Stone’s prison sentence for impeding a congressional inquiry and other crimes was extraordinary because federal prosecutors had suspected that Mr. Stone could shed light on whether Mr. Trump had lied to them under oath or illegally obstructed justice. Even Mr. Stone suggested a possible quid pro quo, telling a journalist hours before the announcement that he hoped for clemency because Mr. Trump knew he had resisted intense pressure from prosecutors to cooperate.

It was the latest example of how Mr. Trump has managed to bend America’s legal machinery to his advantage and undermine a criminal investigation that has dominated so much of his presidency. Mr. Trump’s move was so stunning that Robert S. Mueller III, the special counsel who investigated Russia’s election interference and has insistently refused to go beyond what was in his report, responded with an op-ed published late Saturday in The Washington Post.

“When a subject lies to investigators, it strikes at the core of the government’s efforts to find the truth and hold wrongdoers accountable,” Mr. Mueller wrote. “Because his sentence has been commuted, he will not go to prison. But his conviction stands.”

A jury determined that Mr. Stone, 67, was guilty of seven felonies, including witness tampering and lying to federal authorities, and a judge sentenced him to 40 months in prison. But to some, his brazen taunting of F.B.I. agents, prosecutors and a federal judge for the past three years indicated that he knew how the story would end: His friend Mr. Trump would rescue him.

Mr. Stone has always described the special counsel investigation as bogus. And he has said he refused to help prosecutors because he would not “bear false witness” or “make up lies” about Mr. Trump — not because he was covering up any wrongdoing.

But recently unsealed portions of the Mueller report underscore why investigators were so eager to gain his cooperation. The passages show that prosecutors suspected that the president had lied to them in written answers when he said he did not recall any conversations with Mr. Stone during his 2016 campaign about WikiLeaks. The organization released tens of thousands of emails that Russian government operatives had stolen from Hillary Clinton’s campaign and Democratic political organizations and had funneled to it to help Mr. Trump’s campaign.

Although Mr. Trump said he spoke with Mr. Stone occasionally, he had “no recollection of the specifics of any conversations I had with Mr. Stone” for the six months before the November 2016 election.

Mr. Stone might also have shed light on whether the president’s conduct toward him amounted to possible criminal obstruction of justice. The Mueller team investigated — but did not ultimately determine — whether the president had committed that offense, focusing in part on whether he tried to influence Mr. Stone and other witnesses not to cooperate with investigators.

Mr. Trump repeatedly praised Mr. Stone and others for refusing to aid the investigation. In a December 2018 tweet, he singled out Mr. Stone for resisting “a rogue and out of control prosecutor,” adding, “Nice to know that some people still have ‘guts!’”

“It is possible that, by the time the president submitted his written answers two years after the relevant events had occurred, he no longer had clear recollections of his discussions with Stone or his knowledge of Stone’s asserted communications with WikiLeaks,” the Mueller prosecutors wrote in a passage disclosed last month as a result of a lawsuit.

“But the president’s conduct could also be viewed as reflecting his awareness that Stone could provide evidence that would run counter to the president’s denials and would link the president to Stone’s efforts to reach out to WikiLeaks,” they wrote.

Andrew Weissmann, one of the special counsel’s prosecutors, suggested on Twitter late Friday that Mr. Stone was hiding information. “Time to put Roger Stone in the grand jury to find out what he knows about Trump but would not tell. Commutation can’t stop that,” he wrote, in an unusual public comment about the inquiry by a member of the Mr. Mueller’s team.

In his voluminous report, Mr. Mueller found that Russia systematically tried to sabotage the 2016 election and used WikiLeaks to help accomplish that goal. He also said Mr. Trump’s advisers had welcomed help from the Kremlin but found insufficient evidence of a criminal conspiracy. Mr. Mueller also found numerous times when Mr. Trump tried to impede the special counsel’s investigation, but chose not to determine whether the president had illegally obstructed justice.

It is unclear whether the president asked the Justice Department to weigh in on whether Mr. Stone deserved clemency; a department spokeswoman did not respond to a request for comment. In an interview Thursday with ABC News, Attorney General William P. Barr said he viewed the Stone prosecution as “righteous” but that the president had the prerogative to intervene.

The department’s pardon attorney is expected — but not legally required — to examine requests for clemency in order to guard against politicized decisions, according to Jack L. Goldsmith, a Harvard University law professor and former top Justice Department official during the George W. Bush administration.

In an article posted on the website Lawfare, Mr. Goldsmith wrote that Mr. Trump has not only routinely ignored that process, he has used his powers overwhelmingly to help people with whom he has a personal or political connection.

“No president in American history comes close to matching Trump’s systematically self-serving use of the pardon power,” Mr. Goldsmith wrote.

While he has made no secret of his hope that the president would save him from prison, Mr. Stone said Thursday during an interview on SiriusXM’s “Jim Norton & Sam Roberts” show that he had not talked to Mr. Trump in two years. The president called Mr. Stone on Friday to deliver the news of his commutation personally, an official briefed on the conversation has said.

At his trial, prosecutors asserted that Mr. Stone was so loyal to the president and so contemptuous of federal investigators that he told “whoppers” to a congressional committee investigating how Russia used WikiLeaks to influence the election.

Both Justice Department and congressional investigators were attempting to determine whether Mr. Stone had acted as the campaign’s intermediary with WikiLeaks, and whether he shared information about the organization with Mr. Trump. The president was anxious to distance himself from WikiLeaks after disclosures that Russia was the source of the stolen information it released to damage Mrs. Clinton’s candidacy.

Two former senior campaign officials, Rick Gates and Stephen K. Bannon, testified at Mr. Stone’s trial that he either claimed or intimated that he had inside information from WikiLeaks. And a third former top campaign official, Paul Manafort, told prosecutors that after he told Mr. Trump that Mr. Stone claimed to have access to WikiLeaks, Mr. Trump had asked him to stay in touch with Mr. Stone and keep him updated.

Mr. Cohen, who is serving a prison term for campaign finance violations and other crimes, told prosecutors that he overheard a conversation between Mr. Trump and Mr. Stone in the candidate’s Trump Tower headquarters in July 2016, the month that WikiLeaks released its first tranche of Democratic emails stolen by the Russians.

Mr. Gates testified that in mid-2016, days after WikiLeaks released a batch of stolen emails, Mr. Trump had a phone call with Mr. Stone, then told Mr. Gates that more information would be coming. Although Mr. Gates did not overhear the conversation, and Mr. Trump did not mention WikiLeaks, the context of the exchange suggested that Mr. Stone briefed Mr. Trump on whatever he had picked up about the website’s plans.

Mr. Stone’s public declarations about WikiLeaks made him an early focus of the F.B.I.’s Russia investigation, opened in July 2016. He relished the attention, and sometimes seemed to taunt law enforcement agencies — daring them to find hard evidence linking him to the Russian campaign to sabotage the 2016 election. After he was indicted, he taunted the federal judge overseeing his case with an Instagram post and was penalized with a gag order.

Besides lying to federal authorities, he was convicted of threatening a fragile witness who ultimately refused to cooperate with the congressional committee. He urged that associate, a New York radio host named Randy Credico, to act like Frank Pentangeli, a character in “The Godfather: Part II” who conveniently claimed memory loss when called to testify before a Senate panel, then killed himself to avoid jail and protect a mafia boss.

Mr. Trump’s campaign to undo the legacy of the Mueller investigation has found a willing ally in Mr. Barr. He released an initial summary of Mr. Mueller’s findings that a federal judge later said presented a “distorted” picture, and appointed a prosecutor to examine the origins of the F.B.I. inquiry that the special counsel inherited.

Mr. Barr has also intervened to drop criminal charges against another former Trump adviser, Michael T. Flynn, who pleaded guilty to lying to F.B.I. agents investigating Mr. Trump’s ties to Russia. And five months ago, Mr. Barr overruled career prosecutors who had handled the Stone case and recommended a lighter sentence than they had sought.

Relying on sentencing guidelines, as is customary, four career prosecutors had requested a sentence of seven to nine years. Mr. Barr decided that was overly harsh and the department asked for a “far less” severe prison term.

Although he insisted he had judged the case independently, Mr. Barr acted after Mr. Trump had criticized the department’s recommendation on Twitter, and the president went on to praise his move as well.

The attorney general’s decision threw the Justice Department into tumult. All four prosecutors on the Stone case withdrew from it in protest, and Mr. Kravis quit the department entirely.

Aaron S.J. Zelinsky, another former member of the prosecution team, told a congressional committee last month that top Justice Department officials wanted Mr. Stone treated leniently because of his ties to the president.

He testified: “What happened here was wrong.”