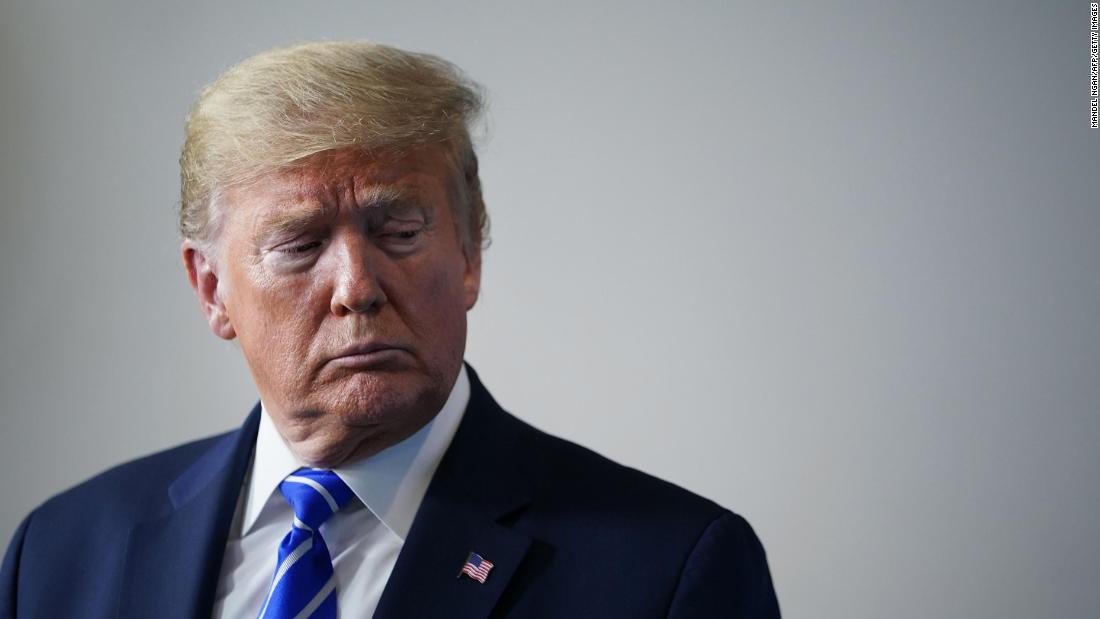 Trump suggested Monday that “many people say” that wearing a mask to prevent the spread of the disease is patriotic, in a tweet using ambiguous language that hinted at his discomfort over the reversal. The grudging move followed weeks of the President politicizing and undermining government advice on face coverings. Once he shared a tweet mocking his Democratic rival Joe Biden for wearing one.
Trump also promised he’d return to front briefings on the government’s response to the crisis on television as early as Tuesday, after weeks of trying to distract from fast climbing infection rates and attacking the science-based advice of government officials.

Five months into the worst domestic crisis since World War II, and after his disastrous call to open up states that had not yet purged the disease sparked a surge of infections, the President may finally be understanding that his performance during the pandemic will be decisive in November’s election. But his recent comments and the actions of his government also indicate a mostly cosmetic public relations attempt to convince the public he’s in charge rather than a complete rethink of strategy as the virus rages out of control.

Briefings will offer Trump a return to the television screens that he craves and likely not coincidentally will resume after he told supporters at the weekend that the worsening pandemic will keep him off the campaign trail for now.

His reversal on masks could be positive if it convinces conservatives who see covering up as an infringement of their freedoms to take a step that could slow the spread. But his delay in acting may have irrevocably damaged public trust in government health recommendations and contributed to the wildfire spread of the disease, especially in western and southern states.

The President is hardly leading here — he’s following the example of many Republican governors who broke with him on masks as the virus pulverized their states. There’s also no guarantee that Trump’s higher profile on the disease will reverse his political slide since the last round of the Trump Covid show ended after his testy, meandering appearances degenerated into open musing of whether ingesting disinfectant could cure the virus — making him look absurdly ill-suited to handle the situation.
Several sources told CNN on Monday that aides, after seeing Trump’s polling slide ahead of November’s election, have spent considerable energy trying to convince him he needs to show leadership on the accelerating pandemic and to get ahead of the story.

Trump’s new briefings will be watched for signs that he is committed to leveling with the American people about the true nature of the challenge and that he’s learned from and acknowledged his mistakes and offers true leadership.

But he made clear Monday that his greatest concern was not rampant figures on new infections or a death toll of more than 140,000 Americans.

When he unveiled the comeback of his briefings in the Oval Office alongside Republican congressional leaders, it was as though it was Sweeps week when TV networks preview new seasons of their top shows.

“We had very successful briefings. I was doing them, and we had a lot of people watching, record numbers watching. And in the history of cable television, television, there’s never been anything like it,” Trump said.

The President implied that he would yet again paint a misleadingly positive vision of the pandemic, over-hyping good news on issues like treatments and vaccine developments rather than the discouraging reality of the situation. And as before, it seems likely that he will lay blame with others.

“I will be discussing, as I call it, the China virus, the China plague,” Trump said Monday.

Trump sees another chance to dominate the screen

The President’s decision to again make himself the face of the pandemic appears to represent a characteristic gut call that no one can present his case better than he can.

If the President can limit skepticism about his handling of the virus in suburban areas that he is currently targeting with a searing law-and-order message, it’s possible he could begin to improve his political fortunes. His reversal on masks comes amid increasing signs of frustration among Washington Republicans as Election Day approaches.
It follows a torrent of polling suggesting that Trump is at risk of a thumping loss to former Vice President Joe Biden in November’s election and that the public is despairing of his management of the virus as it marches across states like Texas, Florida and Arizona. In a Washington Post/ABC News poll at the weekend, Trump trailed the Democrat presumptive nominee by 20 points when voters were asked who would better handle the pandemic.

Biden sought to capitalize on his advantage on Monday.

“He just seems to have given up. He’s raised the white flag,” Biden told a virtual fundraiser on Monday. “Just ignoring the pandemic won’t make it go away even though he thinks it.”

There is little evidence of that the administration has actually decided to change the way it is fighting the pandemic.

In a contentious interview on Fox News Sunday, Trump repeated the untruth that the only reason the US is experiencing more cases is because it increased testing. The administration has clashed with Republican senators who want to fund a new testing and tracing scheme that could slow the spread of the virus.
Trump’s return to briefings also comes a week after White House officials sought to destroy the reputation of the government’s top infectious disease specialist, Dr. Anthony Fauci, who unlike the President has been telling the truth that new outbreaks are not embers but a raging nationwide inferno.

It was not clear whether Fauci would join the President in the briefing room in a sign the administration is finally treating the pandemic with the scientific rigor that it demands. Fauci, however, did appear with Vice President Mike Pence on a coronavirus task force call with state governors and asked them to take recommended mitigation efforts to halt the spread of the disease.

Suspicions that Trump will simply use a new round briefings to perpetuate his lies and false narratives on the pandemic are bolstered by his fresh claims that the United States leads the world in terms of mortality rates. In reality, the US one of the highest death rates from the coronavirus. It does better than the United Kingdom, Spain and Sweden but fares worse than several badly hit countries like Brazil, Mexico and Russia, according to Johns Hopkins University data.

Perhaps the President will finally absorb such data and take a more serious approach. But the experience of his term so far suggests that he will vastly overstate optimistic data points — he repeatedly predicted light at the end of the tunnel in his previous round of briefings, for instance. He also used the spotlight to promote what he billed as game changer treatments like hydroxychloroquine, which turned out to be ineffective against the virus.

School push is a symbol of Trump’s true approach

Trump’s demand for a full time opening of all schools in the coming weeks also shows how he tends to put his own political interests ahead of scientific assessments and a perception of what might be in the national interests.

It is in many ways a repeat of his calamitous call for states to crank up their economies before the science supported the return of bars, restaurants and shopping, especially with many people following the President’s example and spurning the use of face coverings to avoid the spread of infection.

Despite Trump’s adamant calls for kids to go back to class, the administration has done none preparatory work that might convince parents and teachers that it is safe to do so even as the virus infects tens of thousands of people every day.

The consequences of no return to classes are grave, especially for poorer children whose only source of stability and nutrition often comes at school. Abuse at home is often first spotted by teachers. And online learning programs are in many school districts a poor substitute for school.

Sources have told CNN that the President believes that he can play on frustration with continued school closures among suburban voters so far spurning his reelection campaign.

Trump’s failings were epitomized by his comment in the Fox News Sunday interview when he insisted that Fauci was an “alarmist” and that he would “eventually” be proven right about the disease even as states break infection records and the death rate rises again.