Trump’s return to fronting virus briefings is too little, too late 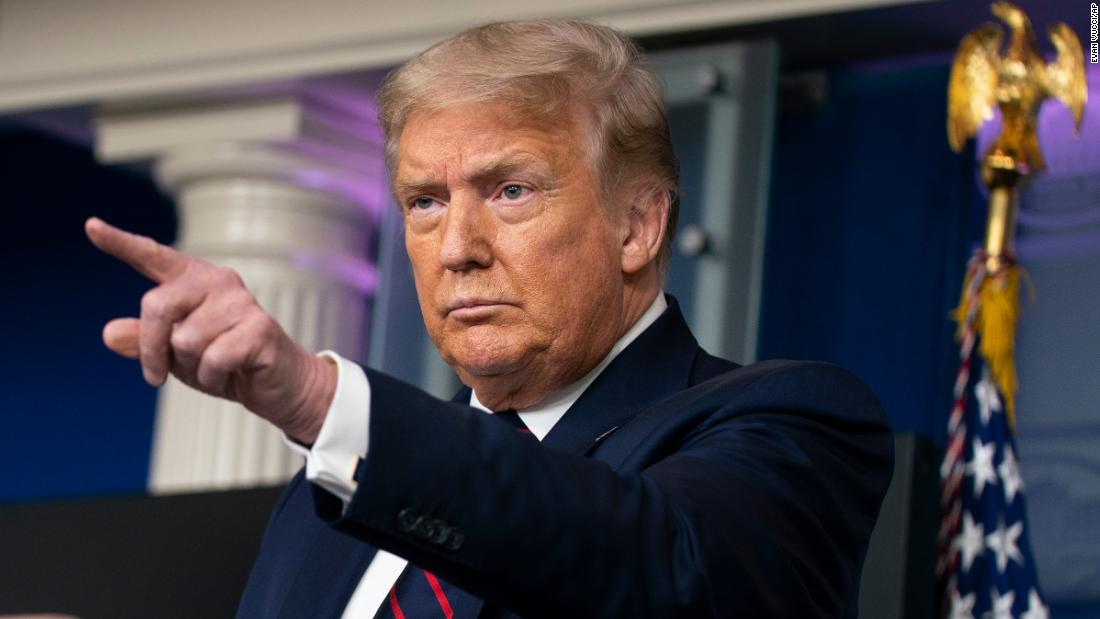 He finally endorsed, without reservation, the wearing of masks, weeks after many state, city and local leaders had pleaded with their constituents to adopt the practice to slow the out-of-control spread of the novel coronavirus. And hours before the daily US Covid-19 death toll topped 1,000 for the first time in two weeks, the President warned in an unusually somber and honest assessment that the crisis was likely to get worse before it got better.

There was no new announcement on setting up a nationwide testing and tracing scheme, which experts say is vital to beating the pathogen. Trump laid out no ideas on how to carry out his demands for school openings while stopping virus spikes, beyond vague predictions of vaccines and therapies that he said were coming more quickly than anyone thought.

And Trump, in a striking lack of empathy, made only passing reference to the 141,000 Americans who have died in a pandemic made worse by his denial and neglect as he fashioned the White House response as a triumph.

The notion that Tuesday’s exercise was a serious attempt to provide the country with a vital health update and not a panicked effort to stabilize a plunging presidency was undercut by the absence of any top government health officials alongside Trump — a President who likes to be the star of his own show.

And the idea that he can rebuild his credibility by suddenly reappearing — after spending weeks ignoring a crisis that he worsened with his demand for premature state openings — is scarcely credible.

‘Whether you like the mask or not, they work’

Health experts could, however, at least take away the fact that Trump made his most full-throated call on Americans to start wearing masks — after spending weeks undermining such advice and mocking those who did cover up.

“We are asking everybody, when you are not able to socially distance, wear a mask,” Trump said. “Whether you like the mask or not, they have an impact.”

In the weeks in which Trump has sided with conservatives who portrayed mask wearing as an infringement of American freedoms, hundreds of thousands of Americans have been infected and thousands have died. Had he led the way on masks once health officials decided to recommend their use, he could have saved many of those lives.

The President, departing from his normal sunny predictions of an imminent end to the crisis, did warn that the pandemic will “probably, unfortunately, get worse before it gets better.” But he undermined his grave tone by re-upping his counter-scientific argument that one day the virus will just simply “disappear.”

Still, some public health experts were pleased with the incremental progress toward the President filling the duties of his role.

“It was good to have the President address the pandemic and the crisis that we are all in,” said Ashish Jha, director of the Harvard Global Health Institute.

“I like the fact he acknowledged the importance of wearing masks and that he acknowledged things will get worse. Unfortunately, there was also a certain amount of misinformation about how great America is doing,” Jha said on CNN’s “The Situation Room with Wolf Blitzer.”

One of the notable absentees from Trump’s briefing was the government’s top infectious diseases expert, Dr. Anthony Fauci, who was the target of a White House whispering campaign last week to damage his reputation.

Fauci responded to Trump’s claim that he was an “alarmist” in an interview with CNN’s Jake Tapper minutes before the President spoke.

“I consider myself more a realist than an alarmist,” said Fauci, a globally respected expert, who said he had not been invited to attend the briefing.

Fauci also argued that the US must improve the time it takes to get test results, again casting doubt on Trump’s glowing reviews of the government effort.

“When you get to six or seven days, that kind of really mitigates against getting a good tracing and a good isolation. So we’ve got to do better on that.”

If Tuesday’s appearance was the start of a new period of exhaustive presidential attention on the pandemic, Trump may make a useful contribution as well as improve his political plight. But snap media reviews of a “change of tone” and a “pivot” by the President ignored his history of shattering scripted narratives with wild tweets and diversions in subsequent hours and days.

In fact, Trump could not even keep his self-discipline for the half hour he was in the briefing room, with a bizarre answer to a question about Jeffrey Epstein’s friend Ghislaine Maxwell, who is charged with recruiting, grooming and ultimately sexually abusing minors as young as 14.

“I just wish her well, frankly,” he said.

Trump reengaged on the virus after weeks of neglect and attempts to create a fictional narrative that the pandemic is almost over and America is well embarked on a “transition to greatness.” The fact that he has been forced to shelve his planned return to the campaign trail may explain what he says will be a daily return to America’s television screens for what he bills as rating-bonanza briefings.

The spread of the coronavirus through Southern and Western states in recent weeks came after states like New York, Connecticut and New Jersey managed — after several months of agony — to suppress their infection curves by ignoring Trump’s pressure to reopen and revive the economy on which his hopes of winning a second term in November depend.

A run of desperate poll numbers and signs that he is trailing Democratic presumptive nominee Joe Biden by double digits prompted an effort by the President’s team to convince him to attempt to get ahead of the story.

Biden, in the knowledge that Trump planned to begin to climb out of a political hole caused by his own management of the virus on Tuesday, hit out at the President’s performance before he spoke.

“He’s quit on you, and he’s quit on this country,” Biden said in a speech in Delaware.

Trump’s previous role in coronavirus briefings had been discontinued because it showcased his rudimentary understanding of the scale of the pandemic and unstoppable instinct to politicize it for his own gain.

While he did back mask wearing, Tuesday’s return revived many of the multiple untruths often uttered by the President. He, for example, tried to paint a picture of the globe in the grip of suffering similar to that of the United States.

“If you watch American television, you’d think that the United States was the only country involved with and suffering from the China virus,” Trump said.

“The fact is that many countries are suffering very, very badly, and they’ve been suffering from this virus for a long time. We’ve done much better than most.”

In fact, many other developed nations in Asia and Europe, which based their fight against the virus on science and not political expediency, have been far more successful in reducing the spread of the pandemic.

Trump also repeated his misleading claims that the United States leads the world in mortality rates and that its performance in testing has been supreme. The surge in cases has meant that many Americans now face a two-week wait for diagnostic tests results when they get them — a period equivalent to the time public health experts recommend quarantining if one suspects they have coronavirus.

The President himself has no such worries. His press secretary, Kayleigh McEnany, suggested earlier Tuesday that he was sometimes tested for the virus multiple times daily. But Trump, perhaps conscious of possible political damage, contradicted her, saying he couldn’t remember any day on which he had been tested more than once.

And while Trump boasted about the US conducting 50 million tests, that total, over the duration of the pandemic, is well short of the many millions of tests a week that scientists say are needed to control the disease and restore a semblance of regular life. And the US has needed to conduct many more tests than other nations since it has failed to get the virus under any measure of control in many states.

There were some indications on Tuesday that the relentless spread of the disease could be stabilizing slightly, with cases rising in 26 states and steady in 20. But the infection figures are still at hugely elevated levels — more than 60,000 a day on average.