Turning Grief for a Hidden Past Into a Healing Space 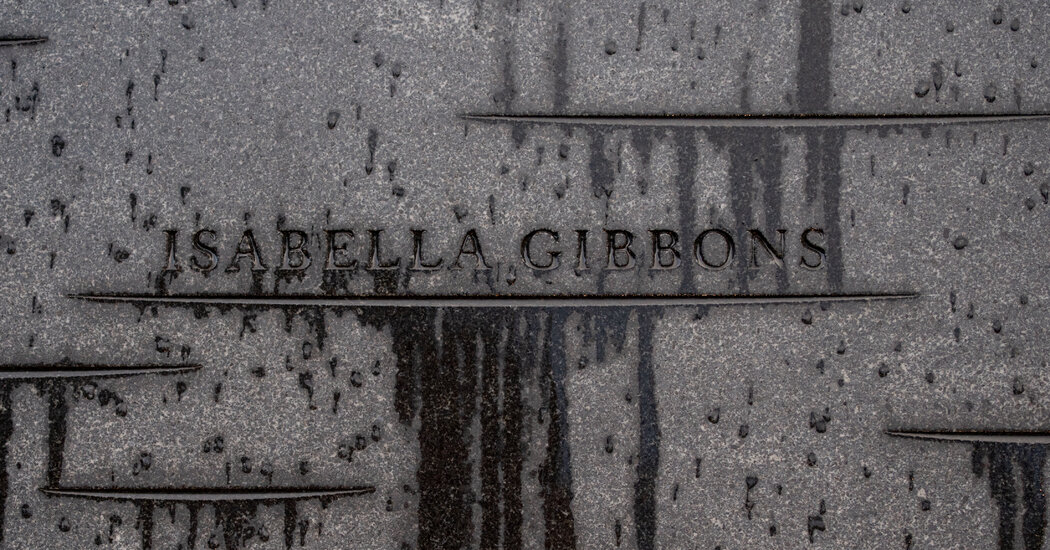 CHARLOTTESVILLE, Va. — “Can we forget the crack of the whip, cowhide, whipping-post, the auction-block, the hand-cuffs, the spaniels, the iron collar, the negro-trader tearing the young child from its mother’s breast as a whelp from the lioness? Have we forgotten that by these horrible cruelties, hundreds of our race have been killed? No, we have not, or ever will.”

So wrote Isabella Gibbons, a formerly enslaved Black woman, two years after the end of the Civil War. She was writing here in Charlottesville, where, in the 1840s, she had worked as a cook at the University of Virginia, on a campus designed by Thomas Jefferson, third United States president, shaper of the Declaration of Independence, author of the words “all men are created equal,” and lifelong enslaver.

Gibbons, who was owned by a university faculty member, a science professor, remained in Charlottesville after Emancipation. By the time she wrote, in 1867, she was a teacher in a Black primary school. She may well have continued to teach until her death in 1889, though the facts of her later life are uncertain.

Indeed, her known story has come fully to light only in the 21st century with the university’s acknowledgment of the extent to which its material and ideological foundations rest on slavery. As a result of that acknowledgment, her resolute words now appear, carved in stone, on a new Memorial to Enslaved Laborers recently installed at the university.

It’s composed of two concentric open carved-granite rings surrounding a circular patch of clipped grass. As with any abstract form, this one invites many readings. (Comparisons to a broken shackle and a ceremonial dance floor have been floated.) But it’s also embedded with hard factual data. The inner ring, low to the ground, carries an inscribed timeline of the lives of American enslaved people — with an emphasis on their presence at the university — from the early 17th century through Gibbons’s death in 1889. A channel cut into the wall is designed to send water flowing beneath and over the incised passages.

Charlottesville is a city of monuments. One, a statue of Jefferson on the campus, was a rallying point, on the night of Aug. 11, 2017, for a large crowd of white supremacists gathering to protest the city’s plan to remove another monument, this one of the Confederate Gen. Robert E. Lee, from a nearby park. When the rally reconvened the next day it was met by counterprotesters, some aligned with Black Lives Matter; in the melee a counterprotester was killed when a car plowed through the crowd.

For generations, and with few exceptions, Americans have tended to ignore their old political monuments, tune them out as neutral features of the civic landscape, neither innocent, nor guilty; just there. The Charlottesville incident changed that. Suddenly, we saw certain images for what they were: ideological weapons, dirty bombs of history. The police killing of George Floyd in May opened our eyes still wider.

If you want evidence, head to Richmond, Virginia’s capitol, an hour from Charlottesville. Drive down wide, stately Monument Avenue, famed for more than a century as an open-air museum of Jim Crow-era Confederate pride, and you’ll see the astonishing sight of what’s no longer there.

In June, after the Floyd killing, protesters pulled down a statue of Jefferson Davis that had stood on the avenue since 1907. In July, a bronze figure of “Stonewall” Jackson was crane-lifted from its pedestal and trucked away to city storage. An equestrian sculpture of Lee still stands, pending a court decision, but its three-story-high base is bright with a rising tide of graffiti and ringed with Black Lives memorials like flowers in a garden.

Corrective alternatives to these monuments are already in place. A sculptural tribute to the Richmond-born tennis star Arthur Ashe has stood on the avenue since 1996. And last December, a bronze equestrian figure titled “Rumors of War” by the contemporary African-American artist Kehinde Wiley was unveiled a few blocks away at the Virginia Museum of Fine Arts. Conceived as a response and rebuke to the cavalcade of white Confederate heroes, Mr. Wiley’s mounted warrior is a young Black man dressed in urban streetwear.

When “Rumors of War” went on temporary display in Times Square last fall, it didn’t make much impact. Its positioning in Richmond near Monument Ave. enhances its critical bite. Yet whether, in the post-#MeToo present, any triumphalist male-warrior figure can automatically have positive political weight is a question. In Richmond, the Wiley piece comes across as being a little too close in spirit to the bellicose models it is meant to confront.

Maybe for this one reason some of the most effective commemorative work of the past several decades has been formally abstract. The Vietnam Veterans Memorial in Washington is a pioneering example. The National Memorial for Peace and Justice (also known as the National Lynching Memorial) in Montgomery, Ala., is another. The Memorial to Enslaved Laborers in Charlottesville, far more modest in scale, follows this lead, particularly in its use of language in place of images.

The memorial’s enclosing circular wall slopes upward to a height of eight feet. The inner surface is carved with single and paired words identifying slaves at the school, some by name (Ishmael, Jenny, Zebray, Eston Hemings), others by jobs (stableman, laundress, gardener, cook), still others by social roles (sister, husband, grandchild, friend). Each word is underscored. About halfway around the wall, the words stop but the underscores continue, place-savers for names yet-to-be-uncovered through research. When light rain or mist washes the wall, water gathers in the incisions and runs down like tears.

And on the wall’s outward-facing side, Gibbons makes a ghostly appearance. The New York artist Eto Otitigbe has engraved an image of her eyes, enlarged from a 19th-century photograph, into the stone, but so lightly that they are clearly discernible only in early and late day light.

Gibbons, along with her husband and children, were among some 4,000 enslaved people working on the university grounds between 1817, when construction began, and the end of the Civil War. The school owned some of these people; others were rented from local enslavers; at least one came from Jefferson’s Monticello.

Much been written about Jefferson’s complicatedly racist views. He wrote of slavery as a moral evil, but implied that it was a necessary one as long as whites and Blacks lived together, Blacks being, in his view, innately inferior. (His version of social justice was to align with a movement that proposed shipping all African-Americans to Africa.) No surprise that the student body he envisioned for his new university was composed primarily of sons of Southern plantation owners, future masters of an agrarian universe, a universe impossible to support without enslaved people’s labor.

And just as the pro-democracy stance he took in the Declaration of Independence glossed over racist thinking, his architectural plan for his utopian school hid the Black presence that sustained the institution. Faculty and students were quartered in the so-called Academical Village, an idyllic hilltop settlement with two rows of residential houses lining a terraced lawn, capped by a library, the Rotunda, modeled on the Pantheon in Rome. (The memorial’s diameter of 80 feet exactly matches that of the Rotunda.)

This showplace was largely built by enslaved laborers, along with freed Black people and white workers. (The lawn’s terraces were hand-dug and shaped.) Enslaved people were responsible for the essential work of supplying food (growing vegetables, butchering animals) and keeping the school clean, and generally “doing for” the white residents. But despite this intimate, daily involvement, they were kept, through Jefferson’s design, out of view as much as possible.

They stayed below the elevated sightlines of the Academical Village, in basement-level quarters and cramped work yards screened by eight-foot-high brick walls. It was there that the laundry workers; gardeners and cooks listed on the wall of the Memorial to Enslaved Laborers spent most of their lives.

By the early 21st century, those lives finally began to be noticed and studied. And in 2007, the university installed, in the floor of the Rotunda, a slate commemorative plaque reading: “In honor of the several hundred women and men, both free and enslaved, whose labor between 1817 and 1826 helped to realize Thomas Jefferson’s design for the University of Virginia.”

Students objected. They found the plaque inadequate and misleading. Its location was out-of-the-way; its words sidelined the labor of enslaved people in favor of calling attention to Jefferson. They organized a competition for an alternative memorial. In 2016, the school, through its President’s Commission on Slavery and the University, commissioned the present Memorial to Enslaved Laborers, with the Boston-based Höweler + Yoon Architecture (Eric Höweler and Meejin Yoon) designing, in collaboration with Mabel O. Wilson, a professor of architecture at Columbia University; Gregg Beam Landscape Architect; Frank Dukes, a community facilitator and professor of architecture at the University of Virginia; and Mr. Otitigbe.

Then began a yearslong series of community consultations, with students, with Charlottesville citizens, and with descendants of slave laborers. A chapel-like grove of trees deep into the campus had initially been favored as a site, until someone pointed out that, historically, local Black people tended to avoid the school grounds. A spot on the edge of the campus adjacent to downtown was chosen.

(The memorial is fully open to the public, though the formal dedication, at which time the water course will be activated, has been postponed indefinitely because of the pandemic.)

There were tussles, too, over what form the memorial would take. Some stakeholders wanted one along traditional lines, with figures and recognizable symbols. But the argument for abstraction — a mode that affords equal representation, through words, for all the people honored now and to come — prevailed. The result is the visual antithesis of the Robert E. Lee statue in Richmond, and its Charlottesville counterpart, which now stands, creating its pernicious karma — America slavery may officially be gone but institutional racism lives on and on — behind protective plastic fencing in its park.

If, from afar, the Memorial to Enslaved Laborers doesn’t announce its theme and purpose, even looks somewhat impersonal and unresolved, that’s all right. With its amphitheater shape, stagelike plot of grass, and soon-evident handmadeness, it feels receptive and usable, a place for things to happen, for performances. (You’re part of one as you bend in close to read the names and stories.) Power is not its language. Closure is not its goal. Active, additive remembrance is. Is this what distinguishes a memorial from a monument? A monument says: I am truth. I am history. Full stop. A memorial says, or can say: I turn grief for the past into change for the present, and I always will.