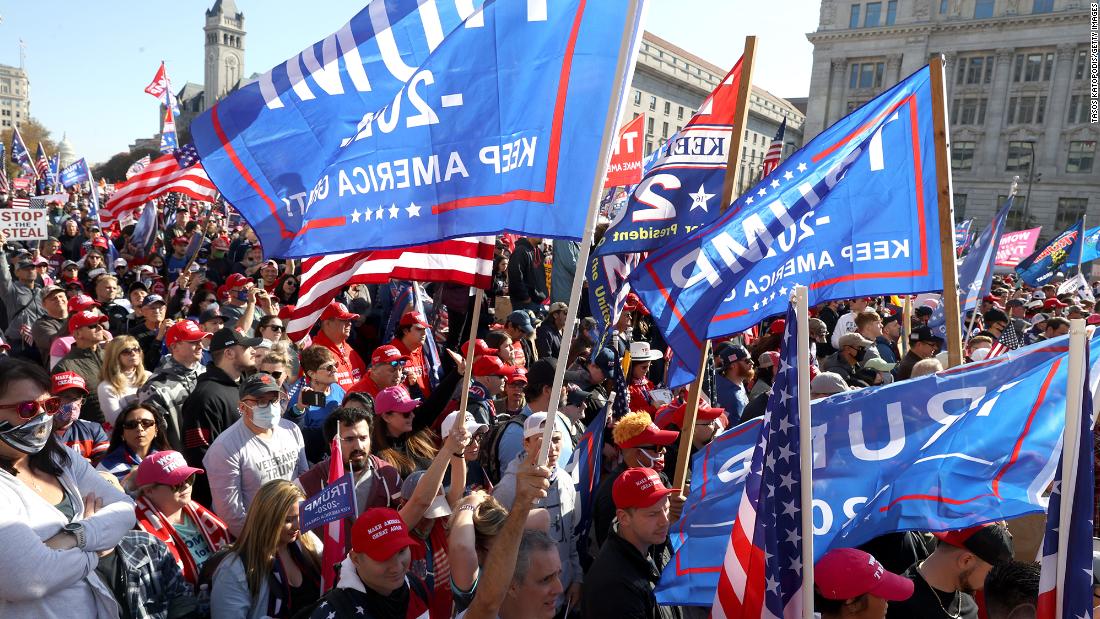 We have reached the tragic endpoint of President Trump’s war on truth.

Two weeks after Election Day, Trump and his media allies continue to contest the results. Baseless “Trump won” conspiracy theories continue to fill up social media feeds and far-right-wing TV shows. Call me naive, but I kind of thought this shtick would start to subside by now! But it is actually getting worse as time goes on. CNN.com’s lead headline captured it on Monday night: “Trump aims to undermine Biden’s legitimacy as legal challenges fizzle.”

But it’s still seeping into the groundwater, like contamination from an overturned tanker truck. Millions of people are hearing what Newsmax hosts and guests are saying. One America News shows are trying to one-up Newsmax. And Fox News shows are reacting to this far-right pressure. So let me walk you through what’s being said and who’s being smeared…

I watched several hours of Newsmax TV on Monday to soak up the channel’s messaging. This quote from 7pm host Greg Kelly summed it all up: “This is not over. Ignore what the mainstream media is telling you right now.”

Newsmax’s narrative is that the election is not over, the media is wrong, Biden is weak, and Trump is strong. The channel’s CEO Chris Ruddy says “Newsmax will accept state results and the Electoral College when certified,” but until then it is operating in a fictional universe where Trump still has a path to victory. It is bashing Fox News and snaring some disaffected Fox viewers: Last Friday the channel averaged 700,000+ viewers from 4 to 8pm, up from 100,000 on a good day prior to the election.

On Monday night, Kelly alternated between playing dumb and playing confident. One minute he self-assuredly said “it’s not over yet” and “these things are still under review” and, regarding Biden, “I don’t think he will be president.” The next minute he ignorantly asked why Trump’s “I won” posts were being flagged by Twitter, but Biden’s posts were not, when Twitter’s policy about election claims is public for all to see. He basically did a dumbed-down version of Sean Hannity’s show, complete with aggrieved banners like “TRUMP SUPPORTERS ATTACKED” and “MICHELLE OBAMA IS SO BORING.” I was amused by the banner that said “MSM CALLING TRUMP A LIAR” because there is nothing controversial about media figures covering Trump’s lies. But in the pro-Trump fictional universe, the people correcting the lies are the liars…

According to Newsmax’s talk shows, the president is still in it to win it, and big breaking news might be right around the corner. I can see why this coverage is exciting, even though it’s a lie. Kelly’s guests on Monday night were Trump lawyers Victoria Toensing and Jenna Ellis and strategist Dick Morris. Kelly assured the audience that “the president has some of the best lawyers in the country working for him.” Morris boldly stated that “I believe that this election was absolutely stolen.” Kelly responded, “I agree with you,” and “I feel like something is going to break our way, in a big way, very very soon.” Later in the hour, he told Ellis that “tens of millions are rooting for you.”

In the real world, Trump’s longshot lawsuits are falling apart. Lawyers are quitting. But Newsmax is offering an alternative: A fantasyland where, in the words of 8pm host Grant Stinchfield’s first guest, convicted liar Roger Stone, “it’s pretty evident that President Trump actually won a majority of all legal votes cast.”

Stinchfield cloaked himself in a facts-first mentality: “All anybody wants is the truth. that’s all we’re asking for.” Then he claimed, without a shred of evidence, that “more than a million Trump supporters descended on DC” over the weekend. One has to wonder how these viewers will react when Biden’s win IS certified and this false hope fizzles out…

What about One America News?

Trump has promoted OANN more than Newsmax over the years, and he did so again on Monday, tweeting “Try watching @OANN. Really GREAT!” However, the channel has not capitalized on the appetite for election denialism quite as much as Newsmax has, sources at the channel told me. Some shows have emphasized that OANN hasn’t called the election yet. (This claim is meaningless since the channel doesn’t have a decision desk.) Some talk show hosts have moved on and attacked Biden’s transition team, while others have zoomed in on voter fraud fantasies. “We must stop the steal now,” 9pm host Kara McKinney said in a promo on Monday.

Is this stuff working? Well, OANN is not rated by Nielsen, so we don’t know. But Newsmax IS rated, and its shows are putting newfound pressure on Fox. At 7pm on Friday, for instance, Kelly averaged 168,000 viewers in the key cable news demo of 25- to 54-year-olds, while Martha MacCallum’s Fox show “The Story” averaged 328,000 viewers in the demo. CNN was way ahead of both channels with 651,000 viewers in the demo for “Erin Burnett OutFront.” Fox is not used to being in this position — losing to CNN, and feeling pressure from far-right challengers. In response, the network is loudly touting its prime time lineup, showcasing promos that say they’re “standing up for what’s right…”

Some curious comments from Tucker Carlson on Fox News Monday night: “Over the weekend we got a lot of calls asking if we’re leaving Fox News. Ironically, at that very moment, we were working on a project to expand the amount of reporting and analysis we do in this hour across other parts of the company.”

What was Carlson talking about? It’s unclear. I was unaware of any chatter about Carlson leaving Fox. He seemed to be reacting to a fake post on Parler. But he told his viewers, “This show is not going anywhere. It’s getting bigger. The people who run Fox News want more of it, not less, and we are grateful for that. We’ll have specifics soon.” Okay, how soon?