Vulnerable Border Community Battles Virus on ‘A Straight Up Trajectory’ 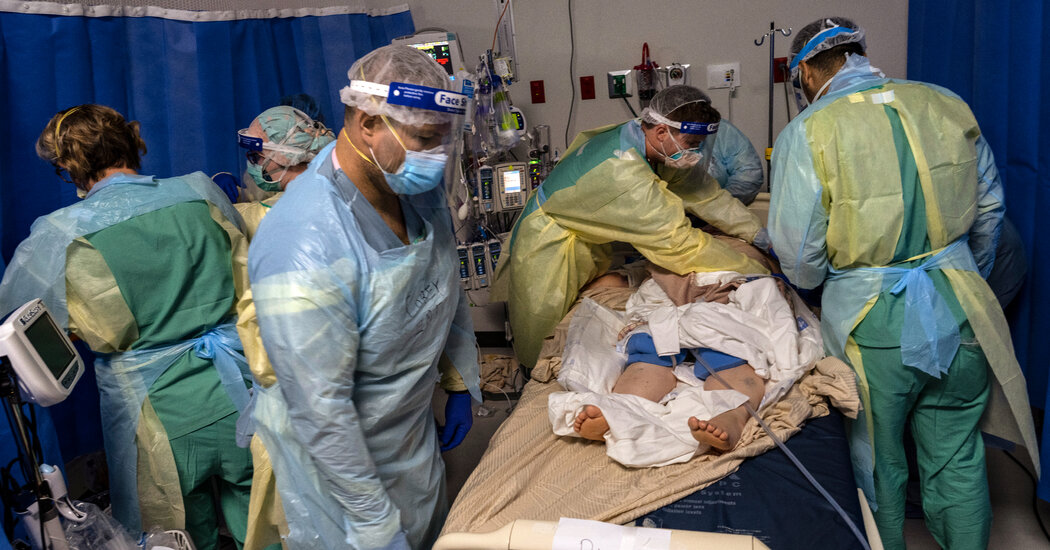 EDINBURG, Texas — On a sweltering day last week near the southern tip of Texas, where high rates of poverty and chronic illness have heightened the ferocity of the coronavirus, Dr. Renzo Arauco Brown made his rounds, checking on patients who were facing severe complications from the virus and barely hanging on to life.

The now-chaotic special infectious disease unit where he works has been clobbered with new admissions in recent weeks. Clinicians sweat under layers of protective gear and yell over constantly blaring alarms.

Standing over a 63-year-old man whose lungs were taking in dangerous amounts of oxygen from a ventilator, Dr. Brown ordered medication to paralyze the man in hopes it would fix the problem. But it was one of many. The man had also suffered a severe stroke and blood clots because of the virus.

Down the hall, a nurse pulled a cushion out from under the head of a 39-year-old woman and found it covered with blood. Dr. Brown rushed over. He turned to the nurse, who was already on the phone ordering supplies for a transfusion. “Tell them to bring it, like, now,” he said.

As the coronavirus expands its destructive path across the United States, it is bearing down on some of the places most vulnerable to its devastation — places like the southernmost wedge of Texas, on the border with Mexico, which has seen a punishing surge in infections.

In the Rio Grande Valley, more than a third of families live in poverty. Up to half of residents have no health insurance, including at least 100,000 undocumented people, who often rely on under-resourced community clinics or emergency rooms for care.

Tick off the list of risk factors for developing severe complications from the virus and you will have described this margin of the country: More than 60 percent of residents are diabetic or prediabetic. The rates of obesity and heart disease are among the nation’s highest. More than 90 percent of the population is Latino, a group that is dying from the virus at higher rates than white Americans are.

There had been an eerie calm during the early months of the pandemic. Many public health officials attribute the initially low number of cases in the valley to earlier lockdown orders. That changed swiftly after Gov. Greg Abbott allowed the state’s shelter-in-place requirement to expire in May.

“We knew that this was a time bomb because the percentage of obesity, hypertension, diabetes is so high,” said Dr. Adolfo Kaplan, a critical care physician who works with Dr. Brown at DHR Health in Edinburg, Texas. “We knew that if the hospital was hit, it was going to be a disaster, and that’s what we are living through.”

More than 57,000 people are now hospitalized around the country, according to the Covid Tracking Project, reflecting a sharp increase that is approaching the previous national peak in April, when the center of the U.S. outbreak was in New York.

The three facilities this hospital is using to treat patients with Covid-19 have been filled to capacity since the first week of July. At times, a dozen or more ambulances have waited outside for beds to become available.

Reclining chairs and hallway beds have been moved into the emergency rooms, where some patients wait more than a day to be transferred to an intensive care unit.

With 11,000 active infections in the region, public health officers estimate that hospitalizations could double within two weeks. But with every hospital nearby also full, it is not clear where the patients will go. On Wednesday, Mr. Abbott announced that a surge of funding, medical workers and supplies would be sent to health care facilities in the area.

“Our curve is a straight up trajectory right now. There’s no flattening. There’s no relief,” said Sherri Abendroth, the hospital’s safety and emergency management coordinator.

DHR Health administrators say they have kept their main hospital largely free of the coronavirus to treat patients with serious conditions unrelated to the pandemic like heart attacks and strokes, as well as some elective procedures.

Months ago, Ms. Abendroth began purchasing extra dialysis machines for patients with kidney failure, as well as for those who would develop it because of the virus. She recruited additional practitioners with experience treating the complications that are common in the valley.

But there were factors outside her control that would add to the challenge of fighting the virus: Many in the community avoid health care at all costs, out of fear that it could lead to a bill they cannot afford or, for some, jeopardize their immigration status.

“They don’t seek health care until they’re much sicker,” she said. “So when we get them, it’s longer hospital stays, more intensive treatment.”

Even the babies in the Rio Grande Valley are particularly vulnerable. High rates of diabetes among pregnant women make it difficult for lungs to develop in the uterus. Even before the pandemic, many babies were put on tiny ventilators until they were strong enough to breathe on their own.

A section of the organization’s women’s hospital that has been sealed off for pregnant women infected with the coronavirus has been expanded twice. Some women have had to begin the early part of their labor in their cars because the unit was full.

In a community known for its strong multigenerational family ties, where doctors joke that some pregnant mothers could fill a grandstand with relatives who want to be present while they give birth, the process of having a baby while infected with the coronavirus has been remarkably somber.

“I wanted everything to be different,” Marisa Ponce, who was expecting twin girls, said as she prepared to be wheeled into an operating room for a cesarean section. Ms. Ponce’s entire pregnancy had been made bleak by the pandemic. Most days, she stayed in her bedroom to avoid getting sick. She skipped having a baby shower and asked her boyfriend’s mother to pick out onesies and a crib. She still somehow contracted the virus.

Under hospital safety procedures, she could not bring anyone with her to give birth. Her doctor had advised her to isolate from the babies for two weeks after they were born, until two tests proved that she had fully recovered.

During the C-section, Ms. Ponce was stoic, surrounded by clinicians who tried to comfort her through layers of protective clothing and eyewear. They looked as if they were dressed to go into space.

When the babies emerged, a loud filtering device that was scrubbing the air of coronavirus particles muffled their cries. Within seconds, a respiratory therapist rushed them to the neonatal intensive care unit. Tears streamed down Ms. Ponce’s face.

Another expectant mother with the coronavirus and a self-described drama queen, Kimberly Muñoz had pictured herself screaming and clutching the hands of her husband and sister-in-law until the second her newborn son had arrived.

Instead, Ms. Muñoz labored alone, her cellphone flashing next to her with messages from family members who were eager for news. During the half-hour it took to push the baby out, she was quiet. When her doctor held her son up above her, Ms. Muñoz reached out for him instinctively, but then stopped herself. A minute later, he was gone. “It broke my heart,” she said.

Similar to roughly 75 percent of people in the valley with health insurance, both Ms. Ponce and Ms. Muñoz are covered by Medicaid because of their low incomes. Doctors say that poverty exacerbates complications from the coronavirus even into recovery. Many locals live in homes with multiple generations sharing close quarters. A spare bedroom where a sick person can isolate is hard to come by.

Last week, in one of the coronavirus units, Jose Aleman Saucedo, 77, was discharged to his modest apartment in the nearby city of Donna after two weeks in the hospital. Earlier that day, a nurse had called a half-dozen of his family members to ask if any could take him in. None said they could, so Mr. Saucedo would have to go home alone.

Doctors and nurses are pulling extra shifts to keep up with the relentless admissions. For many, the devastation feels personal.

“It’s not even about the money,” said Christian Gonzalez, a 25-year-old nurse, born in the valley, who has been working 12- to 14-hour shifts six days a week since coronavirus cases spiked in July. “The people I grew up with — this is their mom, this is their dad who is sick.”

At the start of a shift last week, Mr. Gonzalez noticed a man sitting up in bed. The man’s belly was spasming and his body shook as he struggled to take in oxygen. His skin was turning purple.

When Mr. Gonzalez rushed over he realized the man’s face was familiar: He was a 62-year-old supervisor at the hospital cafeteria, known for his big smile and the especially tasty chicken wraps he made. Like almost all the patients around him, he was also diabetic.

Mr. Gonzalez called for a doctor and then dialed the man’s family on speakerphone to get permission to put him on a ventilator. Within two minutes, the cafeteria supervisor was unconscious with a machine pushing air into his lungs.

Mr. Gonzalez said he hoped the intervention would save his life, but he knew that the majority of older patients with pre-existing health problems do not recover from intubation. “Their outcomes are usually poor,” Mr. Gonzalez said. “Their kidneys fail. It’s just like a cascade of sorrow.”

For patients who were seriously ill before they contracted the coronavirus, there is even less chance of survival. Dr. Brown wore a pained expression under two layers of eye protection as he called the son of one of his patients. The woman had arrived with congestive heart failure, high blood pressure and cirrhosis of the liver.

By her bed were two cheerful signs that had been dropped off by family members. They showed the woman smiling, enveloped at the center of a big group hugs. In Spanish, the signs said “Come home Mom!” and “We’re waiting for you Grandma.”

Dr. Brown had to explain to the woman’s family that he did not expect her to be able to breathe on her own again.

For the staff members at the hospital, the death toll has been crushing.

One afternoon, with tears in their eyes, three nurses in the intensive care unit huddled around an 84-year-old woman who had been talking just a few days earlier. “She looked like she was really going to make it,” one of the nurses said.

That morning, it had become clear the woman’s heart was going to give out. The nurses had called her daughter and promised that the woman would not die alone. One sat beside her, holding a phone to the woman’s ear with her daughter on the line. With her free hand, the nurse stroked her patient’s forearm through her final moments of life.

When the machines indicated that the woman was gone, the nurses stood up slowly. They closed her eyes and placed a blanket on top of her, preparing for another sick patient to take her place.