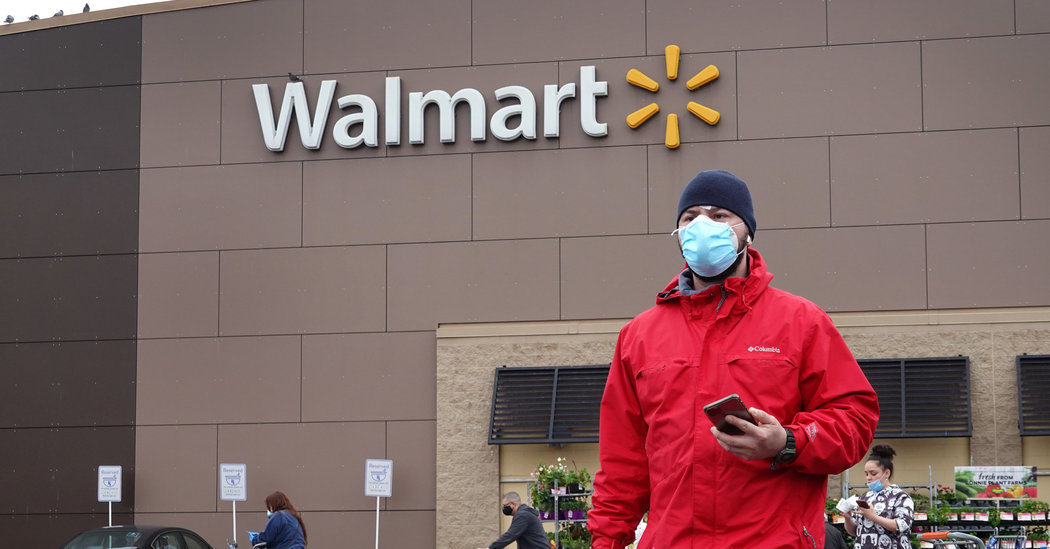 In perhaps the strongest statement yet by a major American company about the importance of masks, Walmart said it would require that all of its customers wear face coverings starting next week.

The new rule from the nation’s largest retailer, with more than 5,000 stores nationwide, comes as health officials and scientists point to wearing masks as a way to slow the spread of the coronavirus. But Walmart’s new policy, which goes into effect on Monday, also means the company is wading into the kind of culturally and politically divisive issue that it has a history of avoiding.

Already, companies like Apple, Best Buy, Costco and Starbucks require customers wear masks. The retailer Kohl’s said on Wednesday that its customers would be required to wear masks starting Monday, and the grocery chain Kroger announced on Twitter that its customers would, too, starting July 22. But the ubiquity of Walmart stores in parts of the country where masks are unpopular make the giant retailer’s move particularly significant.

“We know some people have differing opinions on this topic,” Walmart said in blog post on Wednesday. “We also recognize the role we can play to help protect the health and well-being of the communities we serve by following the evolving guidance of health officials.”

Shortly after the announcement, the National Retail Federation said it hoped Walmart’s move was a “tipping point in this public health debate” and urged all other retailers to enact the same requirement.

The trade group cited the dangers that the customers who do not wear masks posed to retail workers.

“Workers serving customers should not have to make a critical decision as to whether they should risk exposure to infection or lose their jobs because a minority of people refuse to wear masks in order to help stop the spread of the deadly coronavirus,” the group said in a statement.

Many of the details of Walmart’s new policy are still being ironed out. The company has not described how it plans to handle a situation in which a customer refuses to wear a mask.

But in states where mask are already required, retail workers have faced heated and even violent confrontations when they remind customers to cover their faces. At a Walmart in Florida this week, a customer accused people who were wearing masks of being members of a “cult.” She was told to leave the store.

At another Walmart in Florida’s Palm Beach County, a man not wearing mask pulled a gun on man who was wearing a mask on Sunday. The man who brandished the gun is wanted for assault, the sheriff’s department said.

Walmart said that 65 percent of its stores, which include Walmarts and Sam’s Clubs, are in areas where there was already some form of government mandate to wear masks.

At Sam’s Clubs, the company said that it would provide complimentary masks to customers who did not already have one. (Sam’s Club customers have to pay a membership fee to shop there.)

In Walmart stores — which are far more numerous — the company said it was creating a new job called a “health ambassador.” That person will be stationed next to the front door and will remind customers of the new rule.

“Ambassadors will receive special training to help make the process as smooth as possible for customers,’’ Walmart said, and “will work with those who show up at a store without a face covering to find a solution that works for everyone.”

The retailer did not immediately identify what those possible solutions might be, nor did it say that it would provide masks to customers who did not have one.

Walmart’s enormous reach has reshaped communities nationwide, and in the past it has largely avoided publicly weighing in on any politicized debates. A notable exception came last year when it announced it would stop selling ammunition that can be used in military-style assault rifles and would discourage its customers from openly carrying guns in its stores. It also called on Congress to increase background checks and consider a new assault rifle ban. More recently, the retailer said it would no longer sell merchandise associated with Washington’s professional football team before it changed its name.

Retailers, including Walmart, have been criticized for not providing their employees with masks soon enough into the pandemic. But throughout the crisis, retailers had been receiving mixed messages from health and government officials about the effectiveness of masks.

Many stores have been requiring that their employees wear masks since April and May, but health researchers say the protective coverings are most effective when everyone inside an enclosed space is wearing them.

The nation’s business community has been pushing for mandatory masks for weeks, and has grown frustrated with the lack of a governmental response.

The National Retail Federation, along with the Chamber of Commerce, lobbied the Trump administration and governors around the country for a national mask standard in a letter two weeks ago. The groups asked not only for a national standard for when masks should be worn, but also legal protections for businesses that refuse to serve customers who will not wear masks.

“Retailers are protecting the health and safety of communities they serve,” the retail trade group said. “Our elected leaders need to set politics aside and follow their example.”