Washington, On Edge About the Election, Boards Itself Up 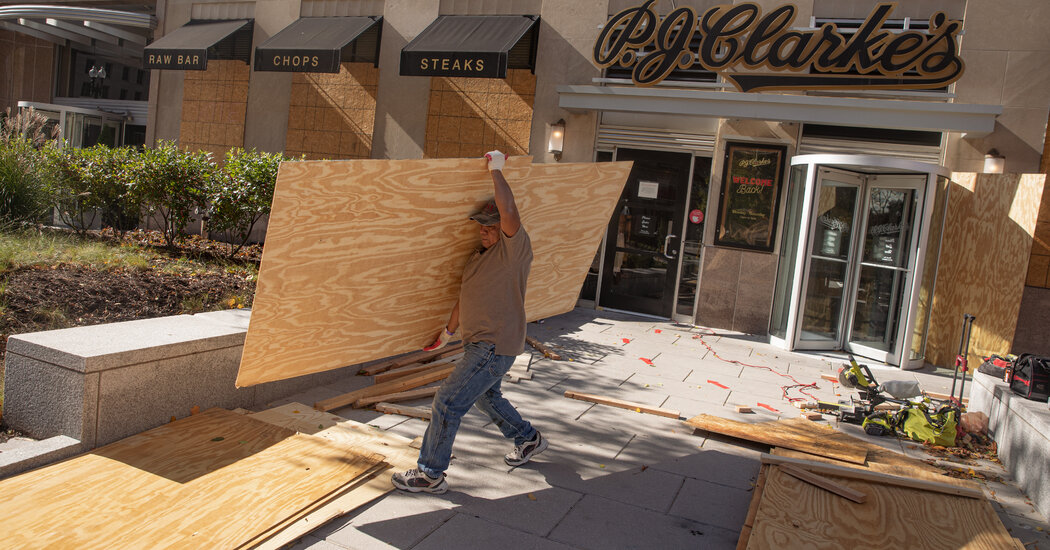 WASHINGTON — Here is one early and unnerving election indicator: plywood.

In recent days, the ominous precaution has been evident all across downtown Washington, fanning out several blocks from the White House. Plywood has been spreading around Capitol Hill, along the nightlife corridors of 14th Street and Adams Morgan, and reaching into the suburbs. Storefronts and office buildings were being boarded up throughout the weekend and probably will be until this is all over, whenever that is.

Plywood is never a comforting sign. It suggests chaos and riots, hunkering down and hurricanes. Elections? That’s not how it is supposed to go here. Yes, the country is palpably on edge, and there have already been scattered reports of ugly episodes nationwide: polling place confrontations, peaceful demonstrators being tear-gassed in North Carolina, supporters of President Trump shutting down a New Jersey highway and reported threats of possible militia violence in Georgia.

But there is something about seeing plywood in the nation’s capital that can seem especially chilling.

Theoretically, this should be the shining city of rituals, norms and orderly traditions. A presidential election should be a time to celebrate an enduring democracy and peaceful transfer of power. But of course, this is 2020.

On Sunday, several news organizations reported that government security officials would be erecting a “non-scalable” fence around the White House complex to secure the area. About 600 National Guard troops have been designated to respond if requested by any governor around the country — or by the Army secretary in the District of Columbia — to support their response to protests, Guard officials said.

The news conjured an immediate echo to the spectacle in Lafayette Square in June, when riot officers and mounted police cleared protesters so that Mr. Trump could hold up a Bible for a photo op in front of St. John’s Episcopal Church.

It appeared that nearly every CVS, Walgreens and 7-Eleven within at least a mile or so of downtown was being heavily fortified.

That is perhaps the most unnerving part: the idea that plywood, suddenly, feels like a normal characteristic of the local architecture at certain times. That no one would flinch upon being warned that the next several days should be treated as a possible disaster.

Students at George Washington University received emails last week saying, “We suggest preparing for the Election Day period as you would for a hurricane or a snowstorm.” Recipients were urged to stock up on food and supplies.

There have been other such advisories. New Zealand’s ambassador to Washington, Rosemary Banks, sent a note in recent weeks to embassy staff members reminding them to keep 14 days of food and essentials at home. The stockpiling has been embassy protocol since the coronavirus pandemic began, but in this note the ambassador said there was a new concern: the prospect that violent protests around the election could mean that staff members might need to avoid venturing into the streets.

The news media was preparing as well. Reporters at The Wall Street Journal’s Washington bureau were issued gas masks and orange bike helmets marked “press.” Local television stations were running “be prepared” segments. Information hotlines and websites were set up.

Security details were bolstered around the private homes of high-profile administration officials. Glenn Kessler of The Washington Post posted on Twitter a photograph from outside Attorney General William P. Barr’s home in suburban Virginia as it was being picketed by supporters of Mr. Trump. They were unhappy that the president was not doing more to ensure the imprisonment of his Democratic opponent, former Vice President Joseph R. Biden Jr., who is leading in the polls.

Several restaurants and retail businesses near the White House posted signs saying they would remain closed indefinitely “out of an abundance of caution,” which might as well be the official slogan of 2020.

At Puglisi Hair Cuts, about half a mile west of the White House, Abel Gaona said business was already slow because of the pandemic. Mr. Gaona, a barber, said he worried that the boards over his windows — which the building’s property manager put up last week — would make people think Puglisi was closed, driving away whatever business remained.

“All the barbers, when we’re not working, we don’t make money,” Mr. Gaona said on Monday morning, as he waited for his first customer to walk in.

Still, he said the plan was to close the barbershop on Wednesday out of concern that the election could lead to violence. “I guess when people don’t like whoever wins, they’re going to protest,” Mr. Gaona said.

It was difficult to go anywhere without encountering some sign that this was no normal election week.

This included social media (obviously). Senator Mark Warner of Virginia, the top Democrat on the Senate Intelligence Committee, reminded his Twitter followers on Monday morning that the country was entering an “unusual” period and that its adversaries might take advantage of this.

“Our intelligence community has warned that the period immediately before and after Election Day is going to be uniquely volatile,” Mr. Warner wrote.