Were the Actions of Federal Agents in Portland Legal? 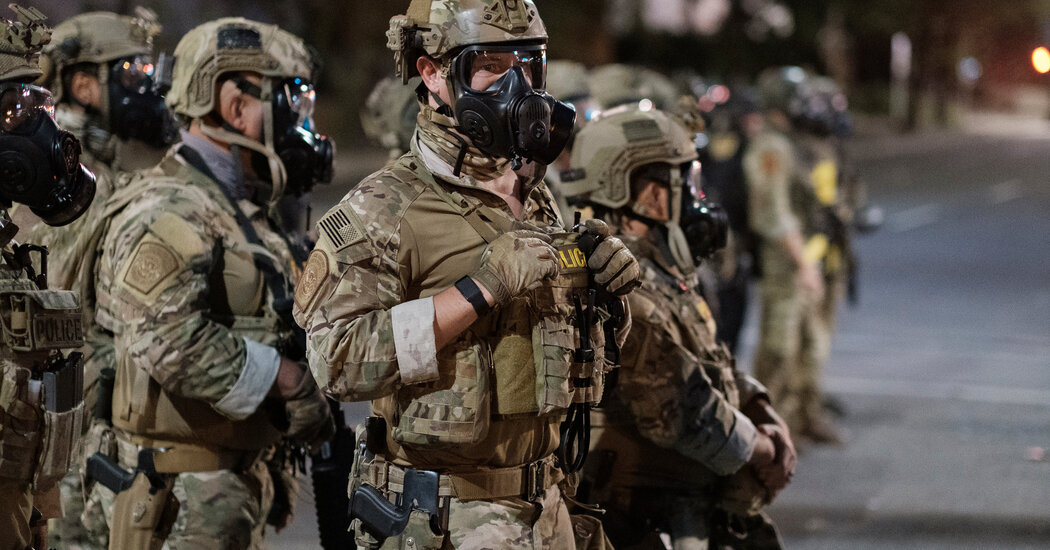 The Department of Homeland Security’s deployment of federal agents to Portland, Ore., has shown the broad legal authority an agency created to protect the United States from national security threats has to crack down on American citizens.

After President Trump signed an executive order directing federal agencies to send personnel to protect monuments, statues and federal property during continuing protests against racism and police brutality, the Department of Homeland Security formed “rapid deployment teams.” Those are made up of officers from Customs and Border Protection, the Transportation Security Administration, the Coast Guard and Immigration and Customs Enforcement who back up the Federal Protective Service, which is already responsible for protecting federal property.

Videos showing federal agents using tear gas on protesters and complaints that federal agents lacking insignia are pulling people from the streets have raised questions over the legal authority that homeland security officials have to crack down on citizens. In Portland, federal agents have acted against the expressed opposition of the local authorities.

But officials in Washington said they had clear authority. Customs and Border Protection, which sent tactical border agents to Portland, cited 40 U.S. Code 1315, which under the Homeland Security Act of 2002 gives the department’s secretary the power to deputize other federal agents to assist the Federal Protective Service in protecting federal property, such as the courthouse in Portland.

Those agents can carry firearms, arrest those accused of committing a crime without a warrant and conduct investigations “on and off the property in question.”

“An interpretation of that authority so broadly seems to undermine all the other careful checks and balances on D.H.S.’s power because the officers’ power is effectively limitless and all encompassing,” said Garrett Graff, a historian who studies the Department of Homeland Security’s history and development.

The department has justified the tactics of the federal agents in Portland by pointing to dozens of episodes, including the defacement of federal property with graffiti, the damaging of buildings with fireworks and the throwing of rocks and bottles at officers.

Detaining demonstrators away from federal properties has also raised questions. Former officials at the Department of Homeland Security said it would normally only dispatch agents to assist with local incidents if the state or municipal governments asked for help and deputized that responsibility. In Portland, local leaders have done the opposite.

But the lack of any consent from local officials just means federal agents cannot rely on state and local laws to justify the arrests. Federal agents can still detain the demonstrators away from federal property if they can assert probable cause that a federal crime was violated, according to Peter Vincent, a former top lawyer with Immigration and Customs Enforcement, which has also sent agents to cities across the United States.

“Homeland security’s authorities are so extraordinarily broad that they can find federal laws that they are authorized to enforce across the spectrum, so long as it has some national security, public safety, human trafficking, criminal street gang conspiracy,” Mr. Vincent said.

But civil rights lawyers and demonstrators have questioned whether the department has used that authority to violate protesters’ right to free speech.

“What is happening now in Portland should concern everyone in the United States,” said Jann Carson, the interim executive director of the American Civil Liberties Union of Oregon. “Usually when we see people in unmarked cars forcibly grab someone off the street, we call it kidnapping. The actions of the militarized federal officers are flat-out unconstitutional and will not go unanswered.”

One demonstrator, Mark Pettibone, 29, said agents who were in camouflage but lacked any insignia forced him into an unmarked van and did not tell him why he was being arrested. Deploying agents without any identification violates the protocols of police departments across the United States.

Mark Morgan, the acting secretary of Customs and Border Protection, said the agents did display signs that they were federal agents but withheld their names for their own safety.