What happens to John Lewis’ vacant US House seat in Georgia 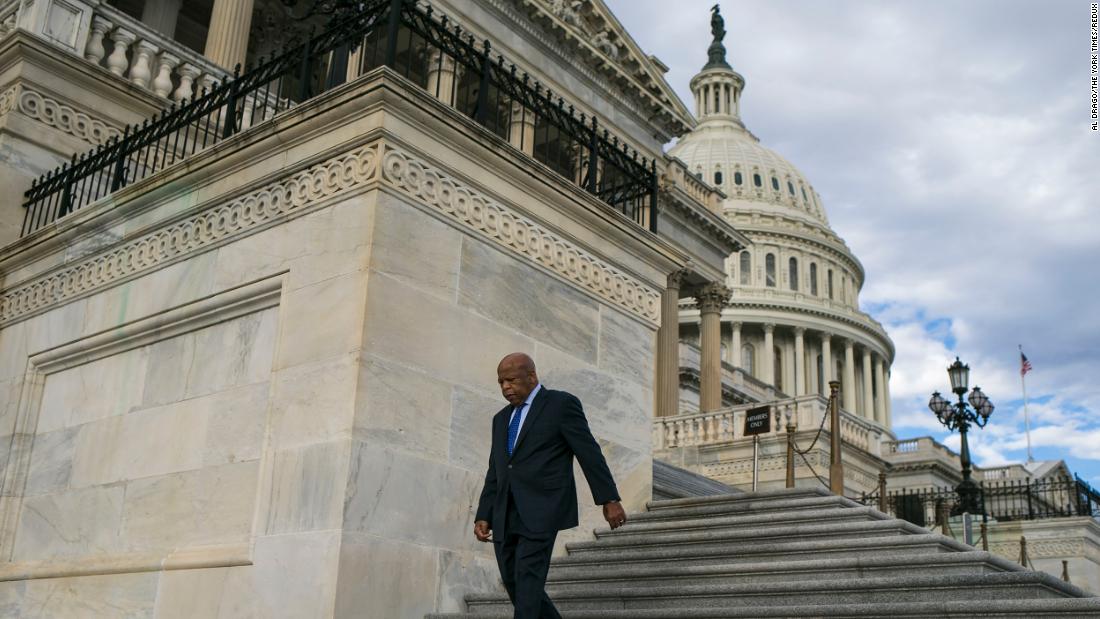 In June, Lewis, who ran unopposed for his 17th term in 2018, won the Democratic nomination for his seat by a resounding 87% of the vote over challenger Barrington Martin II.

But his death leaves the Georgia Democratic Party with the task of naming a nominee to face off against Republican Angela Stanton-King, a criminal justice reform advocate and former reality star, in the general election for this overwhelmingly Democratic seat.

Under Georgia law, the state executive committee of the Democratic Party can appoint a replacement nominee, according to Georgia Deputy Secretary of State Jordan Fuchs.

The party will have to inform the Georgia secretary of state’s office whether they intend to appoint a replacement by Monday, and then inform the office who their replacement nominee is shortly thereafter, Fuchs told CNN in a statement.

The Democratic Party of Georgia confirmed Saturday that its executive committee will meet on Monday at noon to consider a nominee.

“We are deeply saddened by the loss of Congressman John Lewis, and wish very much that we were not in this position today. The Democratic Party of Georgia takes our legal responsibility of naming a nominee to this seat seriously, and we are making every effort to honor Congressman Lewis’ legacy and the people of the Fifth District throughout this process, while working within the applicable legal framework,” said Sachin Varghese, an attorney for the party, in a Saturday night news release.

Interested candidates to be the Democratic nominee will have until Sunday night to apply.

A nominating committee made up of 5th Congressional District and state Democratic leaders, including Atlanta Mayor Keisha Lance Bottoms and former Georgia state House minority leader Stacey Abrams, will whittle down the applicants to between three and five individuals to recommend to the party’s executive committee.

It’s up to Georgia Gov. Brian Kemp, a Republican, to issue an order for a special election to fill the seat for the remainder of Lewis’ term. The special election would have to be held at least 30 days after his announcement.

CNN has reached out to Kemp’s office for comment.

Fuchs said she would recommend that Kemp’s office set the special election for the same day as the November general election — November 3 — when 5th District voters would also vote on someone to hold the seat for the next two-year term.

“I don’t think it’s wise to try to squeeze another election in between the primary runoff (on August 11) and the general,” Fuchs said. “Whoever wins that election will fill the remainder of the current term, which will be a very short time.”

The current term ends in January 2021.

All party candidates would compete on the same ballot in the special general election, and if no one receives more than 50% of the vote, the top-two finishers would advance to a January runoff.

Fuchs said a special election runoff may “end up being a nullity because it wouldn’t be held until January,” which would be the same month that the new Congress convenes.

Stanton-King was uncontested in the Republican primary for the district. In February, she received a pardon from President Donald Trump for her involvement in a stolen vehicle ring in 2007, for which she served six months of home confinement.
Stanton-King’s bid, though, is considered a longshot. Hillary Clinton carried the 5th District by more than 70 points in 2016.The district is rated as Solid Democratic by Inside Elections with Nathan L. Gonzales. Gonzales is also a CNN contributor.

Until the time of the special election, however, the seat will remain vacant, Charles Bullock, a political science professor at the University of Georgia, told CNN.

Staff will remain in place to help constituents, but no one can vote in his place, Bullock said.

Lewis, a civil rights icon, had served as the US representative for Georgia’s 5th District for more than three decades and was viewed “as the conscience of Congress,” his family wrote in a statement announcing his death. He died Friday at the age of 80 after a six-month battle with cancer.

On Friday, Kemp paid tribute to Lewis, saying the Georgia native “changed our world in profound and immeasurable ways.”

“Our nation will never be the same without him. There are no words to adequately express the sadness that countless Americans are feeling upon learning this news,” the governor wrote.
Last year, Kemp, was tasked with filling a vacancy in the US Senate after GOP Sen. Johnny Isakson announced his retirement due to health concerns. The governor appointed Atlanta businesswoman Kelly Loeffler to fill the seat and set the special election for November 3, in which all parties’ candidates will compete.