What the heck is Georgia’s governor doing? 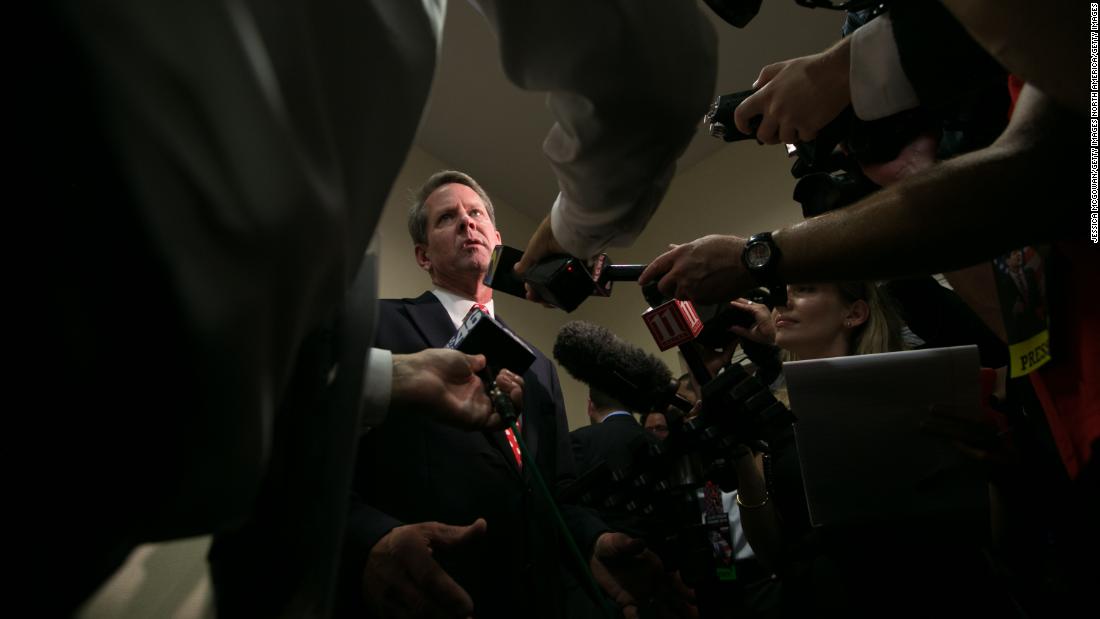 How did Georgia Gov. Brian Kemp (R) respond to this obvious surge in Covid-19 in his state? By signing an executive order banning cities and counties from mandating that people have to wear a mask when in public.

“Though Kemp’s previous orders have barred local governments from taking more restrictive steps than the state, the rules he signed on Wednesday were the first to explicitly ban cities and counties from requiring the use of masks or other face coverings.

“The governor has said he believes requiring masks are a ‘bridge too far’ and that such a mandate is unenforceable. Instead, he’s forcefully urged Georgians to don face coverings and warned not doing so threatens the college football season.”

Kemp’s move to bar local officials from requiring masks came on the same day that Alabama Gov. Kay Ivey, a Republican, mandated mask-wearing amid a similar uptick to Georgia in coronavirus cases in her state.
And on the same day that Oklahoma Republican Gov. Kevin Stitt, one of the most outspoken skeptics of the need to wear a mask, announced that he had contracted the virus.
And just 48 hours after the US Centers for Disease Control and Prevention Director Robert Redfield reiterated his organization’s belief that masks are the best tool we have at the moment to combat the virus. “We are not defenseless against COVID-19,” said Redfield. “Cloth face coverings are one of the most powerful weapons we have to slow and stop the spread of the virus — particularly when used universally within a community setting. All Americans have a responsibility to protect themselves, their families, and their communities.”

Sooooo, what is Kemp doing?

He didn’t say much by way of explanation. In a tweet announcing the executive order, Kemp wrote: “To flatten the curve, I urge all local elected officials to enforce the terms of this order. Together, we will keep fighting #COVID19, weather this storm, and emerge stronger than ever.”

Which, yeah, except that masks are a key part of weathering the storm. So, why not mandate them? Or, at the very least, not block local officials from doing so?

There doesn’t appear to be an answer to that question that doesn’t get back to Kemp’s politics.

Elected in 2018 with a major assist from President Donald Trump, Kemp has made clear that he takes his marching orders on this issue from the President. He was resistant to closing the state at all to deal with the virus amid Trump’s repeated downplaying of the challenge it posed to the country. When Kemp did close the state in early April he offered this as his justification:

“Finding out that this virus is now transmitting before people see signs, so what we’ve been telling people from directives from the CDC for weeks now that if you start feeling bad, stay home… those individuals could’ve been infecting people before they ever felt bad. But we didn’t know that until the last 24 hours.”

Which was, well, crazy. Because asymptomatic transmission of coronavirus — people without symptoms able to pass the virus to others — is something that people had known about for weeks, if not months.

Then, three weeks after Kemp closed the state, he announced it would begin to re-open, making it the first state in the country to do so. He made that decision despite the fact that Georgia had not met the federal guidelines for reopening. Of concerns that he was moving too fast, Kemp said, “if we have an instance where a community starts becoming a hot spot, then, you know, I will take further action. But right now (I) feel like we’re in a good spot to move forward.”

When viewed through that context, Kemp’s decision to disallow cities and counties from instituting mask mandates makes perfect sense. Kemp has largely operated with politics first and public health second throughout this pandemic. This latest decision is just more of the same.