What to Know About the Nashville Explosion 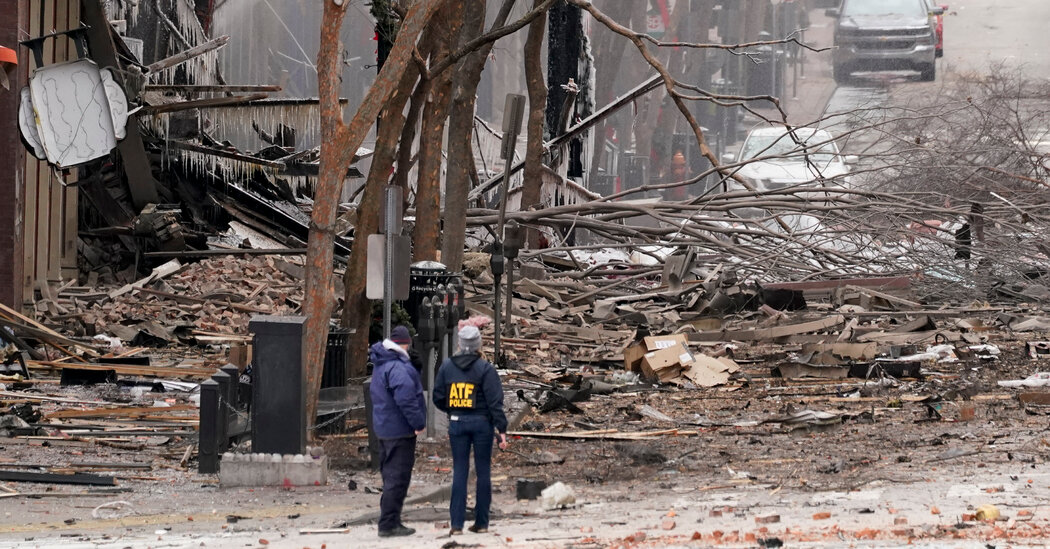 Nashville awoke on Saturday still stunned after an enormous explosion ripped through the city’s downtown on Christmas, mangling storefronts, injuring three people and leaving the city searching for answers.

Investigators were working on Saturday to piece together what had happened before an R.V. — parked on the side of the street and apparently loaded with explosives — detonated. The blast, in an area that regularly draws thousands of people each night, damaged buildings and released a smoke plume that could be seen for miles. No suspect has been identified and the motive so far remains unknown.

Here’s what you need to know about the case.

There was a warning before the explosion.

Before the explosion, a bizarre message blared from the R.V., warning that a bomb would detonate within 15 minutes. Then it began a countdown interspersed with music, the police said.

Police officers who had arrived before dawn to investigate a report of gunshots heard the warning and began to knock on doors and evacuate people out of the area.

Betsy Williams said she heard what she thought were gunshots, and later noticed the R.V. parked across the street from her apartment.

“It started playing this message,” she recalled. “‘Evacuate now. This vehicle has a bomb and will explode. Evacuate now.’”

When the recording, which sounded like a mechanized woman’s voice, began counting down, Ms. Williams said, she and her family abandoned their apartment and rushed to safety.

Police on the scene called for a bomb squad, but it was too late. The R.V. exploded around 6:30 a.m. Ms. Williams watched the blast from afar.

No suspect has been identified.

It is not yet clear who carried out the attack, but the police did release a picture of the R.V., saying its driver drove the vehicle to the curb in front of an AT&T transmission building on Second Avenue North at 1:22 a.m. The building is a few blocks from the phone company’s landmark office tower in the city. The image shows the vehicle heading through downtown with its headlights on, the white camper illuminated by streetlights and glowing storefronts.

The police were still trying to figure out whether anyone was inside the R.V. when it exploded on Saturday. They said they found what could be human remains in the blast area.

The site of the explosion is in a stretch of downtown with honky-tonks, restaurants and other tourist destinations, including a Hard Rock Cafe, the Redneck Riviera bar and barbecue and the Honky Tonk bus tour company. Even as they vowed to track down the person or people responsible, the authorities said the explosion could have been much worse had it happened on almost any other night, when the sidewalks might have been filled with people.

The F.B.I. field office in Memphis is leading the investigation, and the mayor issued an emergency order until Sunday to keep people away from the blast site. Several businesses and people with ties to Nashville have offered a reward for anyone who provides information to solve the case.

The consequences of the blast were far-reaching.

Shattered glass and bricks were strewn about downtown. Trees were charred by the explosion’s flames and broken water mains were spewing water.

The explosion also damaged the AT&T building, causing widespread service outages that continued on Saturday. The explosion affected some cell service across parts of Tennessee, Kentucky and Alabama, and hindered the communication of 20 or more 911 call centers, Gov. Bill Lee of Tennessee said.

The Federal Aviation Administration temporarily halted flights out of the Nashville International Airport because of telecommunications issues caused by the blast. The F.A.A. also labeled the skies within about one mile of the blast “national defense airspace,” meaning pilots are prohibited from flying overhead without special authorization.

To those who live near the blast site, the widespread effects are not surprising.

“The whole neighborhood shook,” said Lily Hansen, who was sitting on a couch in her second-floor apartment a few blocks away. “It looked like something you would see in a horror movie. I just can’t get the image out of my head.”

Buck McCoy, who lives less than a block from the site of the explosion, said his home was destroyed by the blast.

“It just ripped my entire apartment apart,” he said. “There wasn’t one part of the house that wasn’t shook.”

The governor is asking Trump for aid.

Officials said at least 41 businesses — including several historic buildings — had been damaged by the explosion and that one across the street from the R.V. had collapsed.

On Saturday morning, Mr. Lee, a Republican, toured the scene and shared a letter he wrote to President Trump asking him to declare an emergency disaster for Tennessee and send federal aid to help recover, given the “severity and magnitude” of the destruction.

The attack “was intended to create chaos and fear in this season of peace and hope,” Mr. Cooper said. He said that despite the destruction, the city appeared to have avoided a deadly attack because it happened on Christmas.

“Any other morning, it would have been a much worse story, to be sure,” he said.