Who Gets a Vaccine First? U.S. Considers Race in Coronavirus Plans 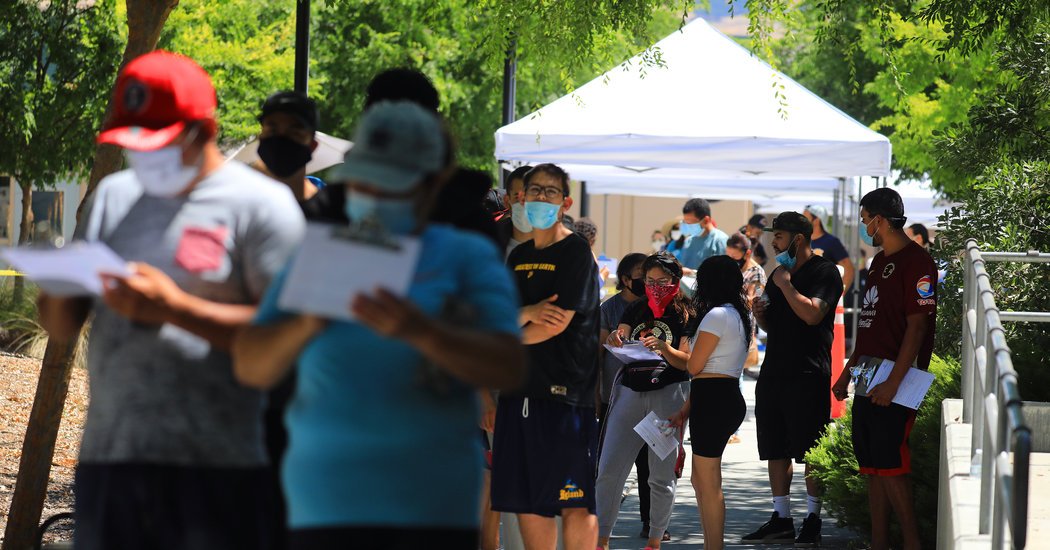 Federal health officials are already trying to decide who will get the first doses of any effective coronavirus vaccines, which could be on the market this winter but could require many additional months to become widely available to Americans.

The Centers for Disease Control and Prevention and an advisory committee of outside health experts in April began working on a ranking system for what may be an extended rollout in the United States. According to a preliminary plan, any approved vaccines would be offered to vital medical and national security officials first, and then to other essential workers and those considered at high risk — the elderly instead of children, people with underlying conditions instead of the relatively healthy.

Agency officials and the advisers are also considering what has become a contentious option: putting Black and Latino people, who have disproportionately fallen victim to Covid-19, ahead of others in the population.

In private meetings and a recent public session, the issue has provoked calls for racial justice. But some medical experts are not convinced there is a scientific basis for such an option, foresee court challenges or worry that prioritizing minority groups would erode public trust in vaccines at a time when immunization is seen as crucial to ending the pandemic.

“Giving it to one race initially and not another race, I’m not sure how that would be perceived by the public, how that would affect how vaccines are viewed as a trusted public health measure,” said Claire Hannan, executive director of the Association of Immunization Managers, a group represented on the committee.

While there is a standard protocol for introducing vaccines — the C.D.C. typically makes recommendations and state and local public health departments decide whether to follow them — the White House has pressed the agency at times to revise or hold off on proposals it found objectionable. President Trump, who has been pushing to reopen schools, fill workplaces and hold large public events, has been acutely focused on the political consequences of public health guidance.

Since the beginning of the pandemic, almost every aspect of the administration’s response has involved scarce resources, high demand and claims that the privileged were receiving unfair advantage. The White House recently created Operation Warp Speed, a multiagency effort to accelerate vaccine development that has invested billions of federal dollars in a growing number of companies. At the public advisory committee hearing, held in mid-June, a Defense Department representative said the operation would address the distribution plans in coming weeks.

To speed distribution, the most promising vaccines will start being made even before they have cleared the final stages of clinical trials and been authorized for public use by the Food and Drug Administration.

But there will be a gap between the first doses coming off the manufacturing lines and a stockpile large enough to vaccinate the U.S. population. “I would say months,” Dr. José R. Romero, the chairman of the Advisory Committee on Immunization Practices, predicted.

The committee, which reports to the C.D.C. director, has long played a key role in determining how to implement new vaccines. The group includes 15 voting members selected by the health secretary who come from immunology, infectious disease and other medical specialties, 30 nonvoting representatives from across the health field, and eight federal officials focused on vaccines. Still, it operates largely out of sight.

Dr. Romero is among four committee members who have been deliberating on the plans since this spring alongside doctors at the C.D.C., representatives from the health field, ethicists and other outside consultants. In June, they briefed the full committee on their work, offering a glimpse of the questions being considered.

As they come up with a multitiered schedule for the first 1.2 million vaccine doses and then the next 110 million, they have focused on who should be considered essential workers, what underlying conditions should be taken into account and what kinds of living environments — nursing homes, homeless shelters — put people at high risk. Among the questions: What should be done about pregnant women? Should teachers go toward the front of the line? Should prisoners be in a top tier?

But for the broader committee, questions of whether to prioritize race and ethnicity sparked the most debate.

Black and Latino people have become infected with the virus at three times the rate of whites, and have died nearly twice as frequently. Many of them have jobs that keep them from working at home, rely on public transportation or live in cramped homes that increase their risk of exposure. They are more likely to suffer from underlying health problems, including diabetes and obesity, that raise the risk of hospitalization and death. Not only do the groups have less access to health services, they have a documented history of receiving unequal care.

The questions come amid a national uproar over the United States’ racist past, which stretches into its response to infectious disease — including the infamous Tuskegee syphilis study, when the government deliberately let hundreds of Black men go untreated even when there was a known cure for the disease.

Dr. Sharon Frey, a professor of infectious diseases at St. Louis University, pointed to health disparities among Black and Latino people at the recent meeting.

“I think it’s very important that the groups get into a high tier,” she said. “Maybe not an entire group, but certainly to address people who are living in the urban areas in these crowded conditions.”

Dr. Peter Szilagyi, a professor of pediatrics at the University of California, Los Angeles, said he was “really struggling with what to do about race and ethnicity.”

He wondered if a lot could be accomplished for minority groups by prioritizing people in general with underlying conditions and by trying to improve their access to health care.

Dr. Romero, the chairman, was doubtful. “This will not address the problem that exists now,” he said. “I think we need to deal with this issue at this time with the information that we have. And it is: They are groups that need to be moved to the forefront, in my opinion.”

Dayna Bowen Matthew, dean of the George Washington University Law School, who has focused on racial inequality in health care and is serving as a consultant on the prioritization issue, agreed.

“It’s racial inequality — inequality in housing, inequality in employment, inequality in access to health care — that produced the underlying diseases,” Dr. Matthew said in an interview. “That’s wrong. And it’s that inequality that requires us to prioritize by race and ethnicity.”

Harald Schmidt, an assistant professor of medical ethics and health policy at the University of Pennsylvania, is not a member of the committee, but has been suggesting other ways vaccine prioritization could work. He predicts that courts would strike down any guidelines explicitly based on race and ethnicity. Instead, he has proposed using an index that takes into account education, income, employment and housing quality to rank neighborhoods by socioeconomic disadvantage that he says could serve as a good proxy.

“It’s imperative that we pay attention to how Covid has impacted the health of minorities differently; otherwise it compounds the inequalities we’ve seen,” Dr. Schmidt said.

“Because of Tuskegee and structural racism within the health care system, you have to make a case much more strongly to the African-American population,” Dr. Schmidt said.

Whoever is prioritized for the first doses, it will not matter if the vaccines don’t work for those demographics. And that will not be determined unless the vaccine trials themselves include those groups. So far, several vaccine candidates have entered final Phase 3 trials.

At a Senate hearing last week, Dr. Robert R. Redfield, the C.D.C. director, and Dr. Francis Collins, head of the National Institutes for Health, emphasized the need for racial and other diversity within the trials.

“The last thing we want to be is trying to recommend who gets the vaccine and we don’t have any data on how the vaccine works in the population that we think really needs this vaccine,” Dr. Redfield said.

“This has got to be a really high priority,” Dr. Collins said. “This may make it more challenging to run a Phase 3 vaccine trial. When you’re trying to enroll a very diverse set of volunteers, it would be much easier just to line up a bunch of 20-somethings who happen be from the white population, but that is not the only answer. We need to really have this diversity.”

Dr. Collins said he and Dr. Redfield had pushed to bring the National Academy of Medicine, an independent nonprofit, into the advisory committee’s work because people were “uneasy about the government calling the shots here.”

Dr. Romero said that the advisory committee would start holding more frequent public meetings on prioritization later this summer, and that it would eventually involve representatives of the communities being considered in its deliberations.

“If we feel that minority populations are important, then certainly we would look at the perceptions of those target groups,” he said.

“From an Operation Warp Speed standpoint, in our first few weeks, we really focused on the earlier product development and making some of those important decisions to get to accelerate the product development pipeline,” said Colonel Hepburn, who is also a physician.

But now, he said, there were other questions to consider: “How would these vaccines be distributed based on their induction? Which populations benefit most from vaccinations? Those are critical issues that need to be addressed, and our intention is to address those in the coming weeks.”