Wildfires Live Updates: As Crews in Oregon Battle the Fires, a Search for the Missing 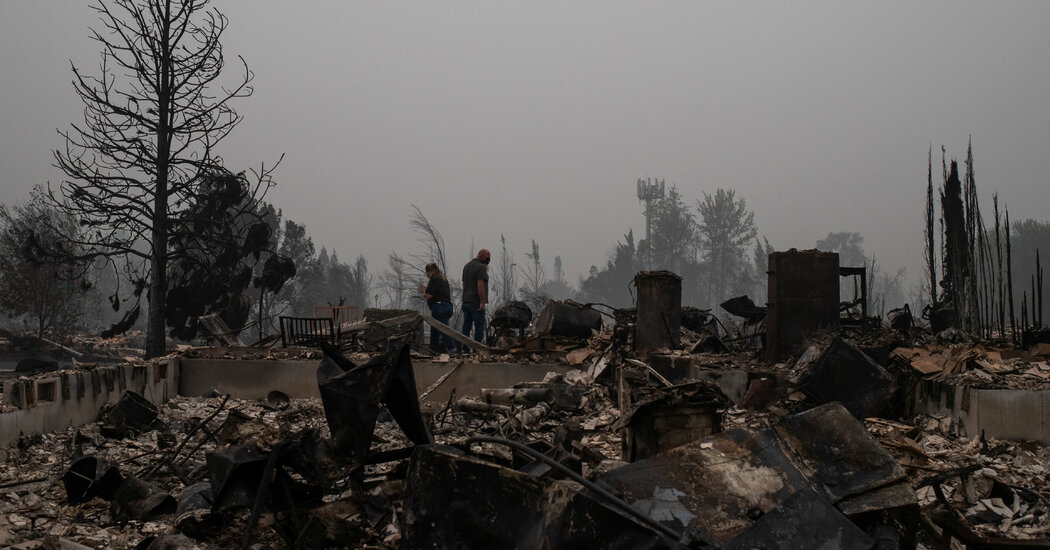 Exhausted fire crews worked on Sunday to beat back raging wildfires that have scorched millions of acres across three Western states, all while an anguished search goes on for the dozens of people who remain unaccounted.

At least 23 people have died in the fires, and in Oregon, which has taken the biggest blow in the last few days, officials have warned of the possibility of “mass fatality incidents.”

Thousands have been pushed from their homes as communities have been swallowed by flames, leaving nothing but charred ruins after burning through. The fires have also cast a haze over a broad stretch of the West Coast, leaving the region with what officials have said was the worst air quality on the planet.

“It is apocalyptic,” Senator Jeff Merkley, Democrat of Oregon, said Sunday on the ABC program “This Week.” “I drove 600 miles up and down the state, and I never escaped the smoke. We have thousands of people who have lost their homes. I could have never envisioned this.”

The National Weather Service said on Sunday that the air quality could begin to improve for some cities beginning Monday.

Calmer winds blowing inland from the Pacific Ocean, and cooler, moister conditions on Saturday had helped crews make some progress on the fires, which Gov. Kate Brown of Oregon called a “once-in-a-generation event.”

Ms. Brown said it was clear that the intensity of the wildfires was fueled by a “perfect fire storm” of conditions, including rapid wind speeds, high temperatures and decades of drought. In most years over the past decade, roughly 500,000 acres burned, yet this week alone, she said, more than one million acres had burned in the state.

But Ms. Brown, appearing on the CBS program “Face the Nation,” said that improving weather conditions on Sunday might give firefighters a foothold as they push to contain the fires. “It gives our hardworking firefighters an opportunity to go out and be proactive and build containment lines,” she said.

Even as Ms. Brown gave her assessment, the National Weather Service issued a “red flag warning” because of the prospect of windy and dry weather in southern Oregon and nearby counties in California. Some areas could see gusts as high as 40 miles an hour, and forecasters said the winds would “likely contribute to a significant spread of new and existing fires.”

“We could be looking at a challenging Sunday,” Senator Ron Wyden of Oregon said.

Sunday’s warnings include Jackson County in Oregon, where the Almeda fire swept through the communities of Talent and Phoenix, scorching hundreds of homes and leaving at least five people dead. The authorities in Jackson County said their list of missing people remained at about 50, although some were being discovered safe.

On Saturday, the Oregon State Police announced that the state fire marshal, James Walker, had resigned after being placed on administrative leave earlier in the day. The statement did not say why Mr. Walker had resigned. He was replaced by his chief deputy, Mariana Ruiz-Temple.

President Trump is scheduled to visit McClellan Park, Calif., on Monday to be briefed on the wildfires. Mr. Trump acknowledged the severity of the fires spanning the entire coast. “I spoke to the folks in Oregon, Washington,” he said late Saturday. “They’ve never had anything like this.”

Mr. Trump cited a lack of forest management as a driving force behind the outbreak of fires, which drew sharp rebukes from officials on the West Coast.

“Now we have a blowtorch over our states in the West, which is climate change,” Gov. Jay Inslee of Washington said in an interview on “This Week.” “And we know that climate change is making fires start easier, spread faster and intensify.”

Mayor Eric Garcetti of Los Angeles said it was important that the president witness the devastation for himself. Yet on the CNN program “State of the Union,” he assailed Mr. Trump for his efforts to loosen climate control regulations, saying that the administration has had its “head in the sand” on environmental issues.

“This is not just about forest management or raking,” Mr. Garcetti said. “Anybody who lives here in California is insulted by that, quite frankly, and he keeps perpetuating this lie.”

At least 23 people have died in recent blazes along the West Coast.

They lived more than 500 miles from each other — one in the wooded foothills of the Sierra Nevada, northeast of California’s capital, Sacramento, the other in a thickly forested canyon east of Oregon’s capital, Salem.

They were young lives cut short, victims of the great western wildfires of 2020.

The arrival of fire season in the American West always brings fear of fatalities, especially among the elderly and infirm, unable to escape the flames.

But the deaths of Josiah and Wyatt, two athletic teenagers, speak to the speed and the ferocity of the fires that this year have burned a record number of acres, four million in California and Oregon combined.

With thick smoke blanketing large parts of Washington, Oregon and California and tens of thousands of people evacuated, the fires have been the worst in decades, exacerbated by climate change. By Saturday, fires in California had burned 26 times more territory than they had at the same time last year.

Across the West this weekend, law enforcement authorities were scouring incinerated communities for missing persons. At least 23 people have died in the fires, with dozens more missing and peak fire season only beginning in many parts of the West.

Although fires in previous years have proved more deadly — a firestorm in 2018 that decimated the town of Paradise in California killed more than 80 people in a single night — the numbers obscure the trauma that each death brings to the small communities where wildfires have caused such terror.

Ash fell from an apocalyptic orange sky as Jennifer Willin drove home last week from the only school in tiny Berry Creek, Calif., where she had picked up a pair of Wi-Fi hot spots for her daughters’ remote classes. Hours later, her cellphone erupted with an emergency alert: Evacuate immediately.

By the next morning, what one official described as a “massive wall of fire” had swept through the entire Northern California town of about 1,200 people, killing nine residents and destroying the school and almost every home and business.

Ms. Willin and her family escaped to a cramped hotel room 60 miles away. In her panic, she had forgotten to grab masks, but she had the hot spots, along with her daughters’ laptops and school books. On Monday, the two girls plan to meet with their teachers on Zoom, seeking some comfort amid the chaos.

Amid twin disasters, the remote learning preparations that schools made for the coronavirus crisis are providing a strange modicum of stability for teachers and students, letting many stay connected and take comfort in an unexpected form of virtual community.

“They’re still able to be in school,” Ms. Willin said, “even though the school burned to the ground.”

Smoke from wildfires, which can include toxic substances from burned buildings, has been linked to serious health problems.

Studies have shown that when waves of smoke hit the rate of hospital visits rises and many of the additional patients experience respiratory problems, heart attacks and strokes.

The health effects of wildfire smoke don’t go away when skies clear. A recent study on Montana residents suggested a long tail for wildfire smoke exposure.

Erin Landguth, an associate professor in the school of public and community health science at the University of Montana and the lead author on the study, said research had shown that “after bad fire seasons, one would expect to see three to five times worse flu seasons” months later.

If you can’t leave an area that has high levels of smoke, the C.D.C. recommends limiting exposure by staying indoors with windows and doors closed and running air-conditioners in recirculation mode so that outside air isn’t drawn into your home.

Portable air purifiers are also recommended, though, like air-conditioners, they require electricity. If utilities cut off power, as has happened in California, those options are limited.

If you do have power, avoid frying food, which can increase indoor smoke.

Experts say it is especially important to avoid cigarettes. They also recommend avoiding strenuous outdoor activities when the air is bad. When outside, well-fitted N95 masks are also recommended, though they are in short supply because of the coronavirus pandemic.

Some other masks, particularly tightly woven ones made of different layers of fabric, can provide “pretty good filtration,” if they are fitted closely to the face, said Sarah Henderson, senior scientist in environmental health services at the British Columbia Center for Disease Control.

Multiple mega fires burning millions of acres. Millions of residents smothered in toxic air. Rolling blackouts and triple-digit heat waves. Climate change, in the words of one scientist, is smacking California in the face.

The crisis in the nation’s most populous state is more than just an accumulation of individual catastrophes. It is also an example of something climate experts have long worried about, but which few expected to see so soon: a cascade effect, in which a series of disasters overlap, triggering or amplifying each other.

“You’re toppling dominoes in ways that Americans haven’t imagined,” said Roy Wright, who directed resilience programs for the Federal Emergency Management Agency until 2018 and grew up in Vacaville, Calif., near one of this year’s largest fires. “It’s apocalyptic.”

The same could be said for the entire West Coast last week, to Washington and Oregon, where towns were decimated by infernos as firefighters were stretched to their limits.

California’s simultaneous crises illustrate how the ripple effect works. A scorching summer led to dry conditions never before experienced. That aridity helped make the season’s wildfires the biggest ever recorded. Six of the 20 largest wildfires in modern California history have occurred this year.

If climate change was a somewhat abstract notion a decade ago, today it is all too real for Californians. The intensely hot wildfires are not only chasing thousands of people from their homes but causing dangerous chemicals to leach into drinking water. Excessive heat warnings and suffocating smoky air have threatened the health of people already struggling during the pandemic. And the threat of more wildfires has led insurance companies to cancel homeowner policies and the state’s main utility to shut off power to tens of thousands of people pre-emptively.