Will Florida, the Recount State, Be Ready for the Election? 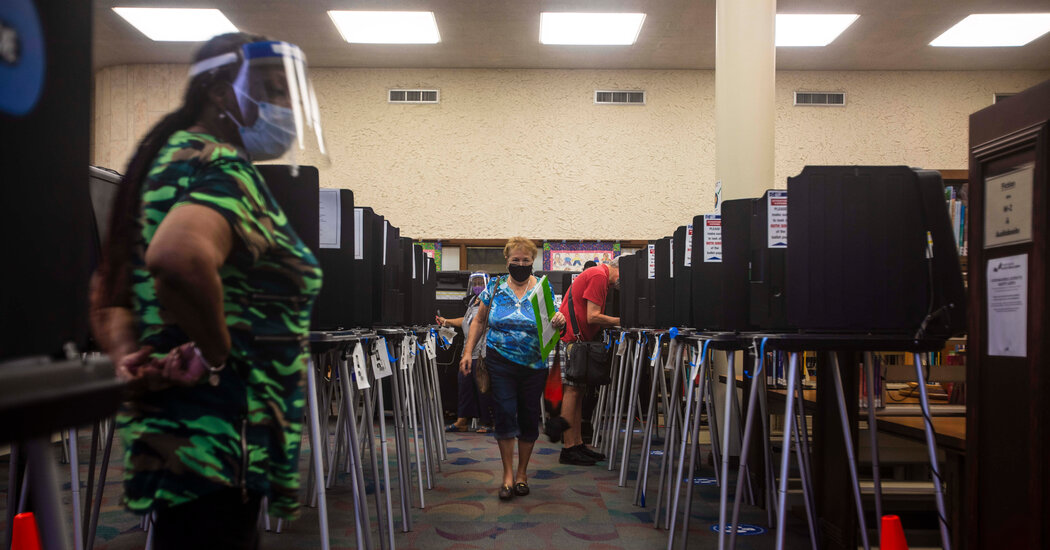 MIAMI — Most states have the occasional problems running their elections. Not Florida. Florida has debacles.

And, of course, the granddaddy of all election fiascos: Bush v. Gore in 2000.

More than two decades of scandals and blunders have made Florida the nation’s elections punchline, the state that kept the world at the edge of its seat while votes for president were manually recounted. The shadows of Florida elections past seem to lurk everywhere.

“I feel like I’ve seen this movie before,” Judge Mark E. Walker of the Federal District Court in Tallahassee said in a ruling this month after the state’s voter registration website crashed under the weight of thousands of last-minute applications.

Now the state, like the rest of the nation, faces perhaps the most daunting test yet: a 2020 election conducted in the midst of a pandemic, amid unsubstantiated fraud claims spread by the president and others. Reasonable predictions suggest that the legal wrangling over the results could stretch far beyond election night.

Elections officials say yes. With the snafus of years past, they say, have come lessons that prepared the state to process a crush of mail ballots and juggle the logistics of the coronavirus, such as securing drop boxes and distributing hand sanitizer.

But this is Florida, the nation’s biggest presidential battleground and a mirror of American polarization, where winning an election by more than a percentage point is considered a landslide. And here, to crib Faulkner, the past is never really past.

The most pressing concern is the surge in mail ballots expected as a result of the pandemic and a corresponding rise in envelopes missing signatures or signatures not matching the ones on file, both of which could result in rejected votes. Florida allows voters to “cure” deficient ballots but that requires time for supervisors to notify them of the problem.

That vulnerability is obvious. Others are less so.

An intrusion by Russian hackers into at least two Florida counties in 2016 has never been fully explained, raising questions about whether the state might be open to attack again, in spite of a slew of upgrades that officials contend have secured the system.

Civil rights groups complain that the Republican leadership in the state is itself raising last-minute obstacles to some voters, including those intending to use convenient drop boxes and former felons who only recently regained their voting rights.

And the prospect of citizens flocking to stake out polling stations in response to unsubstantiated rhetoric about possible fraud has prompted elections supervisors such as Mark Earley of Leon County to sit down with local law enforcement to talk about keeping the polls safe.

“Florida has very good laws about voter intimidation,” Mr. Earley said. “I’m a little bit more concerned about party heads responding to the noise. We don’t need help, OK? More people with high emotional levels is not a recipe for helping a supervisor of elections office. Let us do our jobs.”

A lot has changed in the two decades since Florida thrust the nation into uncertainty over the results of a presidential election, said Mr. Earley, who was already working in the office when a complicated recount of punch-card ballots delayed the result of the 2000 presidential race. The count was challenged all the way to the U.S. Supreme Court and resulted in a win for George W. Bush over Al Gore. Even now, Florida continues to be haunted by what happened: A new HBO documentary about the recount, “537 Votes,” premieres this week.

The punch-card ballot machines that notoriously led to “hanging chads” are gone, as are the infamous “butterfly ballots” that left many voters confused about whether they had voted for their preferred candidate. So are the problematic electronic ballot machines that succeeded them in some places.

Florida law is now much more clear about when recounts are required and how to conduct them.

“It’s not just because of the absence of hanging chads that we won’t have another 2000,” Mr. Earley said. “It’s because we actually have good statutes and rules in place on how to conduct a recount.”

Still, there is only so much the state can do: Florida elections are not run by a centralized state agency, noted Christopher B. Mann, an assistant political science professor at Skidmore College. The state effectively has 67 separate elections operations, one in each county, with guidance from the secretary of state.

“I cannot think of another swing state that has a decentralized system like this,” Dr. Mann said. “My concern is that there will be counties that are less prepared.”

The new rules were in place during the recounts two years ago in the races for Senate, governor and agricultural commissioner, and there were still glitches. The governor’s race was not conceded until 11 days after the election. The Senate race required a grueling 12-day recount.

Broward County had designed a confusing ballot. Palm Beach County failed to make the recount deadline after the maker of one of its machines said officials had improperly used a paper clip to slow it down. Statewide, the machine recounts inexplicably came up 5,000 votes short.

After a lawsuit this year, the state’s eight largest counties agreed to keep scanned ballot images on file, providing a digital trail to verify the vote tally even if paper ballots somehow go missing. At least 27 counties previously kept the scans voluntarily.

Florida’s elections infrastructure has also undergone significant cybersecurity improvements, officials say, though few specifics have been given since Russia “spear phished” at least two counties in 2016, gaining access to their voter rolls. The authorities have said there was no evidence of tampering, and the hackers did not get into any vote tallies, which are kept separately.

The authorities have refused to identify the hacked counties. Washington County, a small county in the Florida Panhandle, was one, a source with knowledge of the investigation confirmed to The New York Times last year. A book published last month by the journalist Bob Woodward identified the second as St. Lucie County, on the Treasure Coast. Gertrude Walker, the longtime elections supervisor there, said if her county was hacked four years ago, the authorities never informed her.

Florida has since equipped counties with special sensors to detect suspicious cyberactivity. Supervisors have also received more than $15 million in federal election security grants since 2018.

But some of the state’s vote-counting problems began long before hacking became a significant threat, some of them amounting to old-fashioned fraud and election mismanagement. They have run the gamut from illegal ballot harvesting to a cutback in early voting hours that resulted in huge lines.

In 1997, a judge ruled that the Miami city elections were so riddled with absentee-ballot fraud that he did not order a do-over: He simply declared a new mayor. Through largely no fault of his own, Xavier L. Suarez was thrown out of office 111 days after becoming mayor. A city commissioner wound up in jail.

Already this year, there have been issues.

Last week, a lawyer for the secretary of state, advised elections supervisors that drop boxes would need to be monitored full-time, a new burden that could reduce the boxes’ availability.

Also last week, the director of Florida’s division of elections announced that the state would begin the process of purging former felons who owe court fines and fees from the voter rolls. There is not time to remove them before Nov. 3, but critics called it a move that could intimidate even those clearly eligible to vote.

More problems occurred when the state voter registration website crashed on Oct. 5, the deadline, leaving thousands of potential voters temporarily in the lurch.

Charlotte Bernhardt, a high school teacher near Tampa, wanted to vote so badly that after returning to Florida from Australia, she had tried to register in person three times. Once, the line was way too long. The second time she lacked a proof of address, and the third time she got there too late for the 3 p.m. cutoff.

She tried again online on the last day but was one of those who found the website overwhelmed — though the state ultimately extended the deadline through part of the next day.

The incident left Ms. Bernhardt, 43, wary of Florida’s capability to pull off an election.

“I am a little scared of what’s going to happen,” she said. “They can’t handle the registration,” she added, never mind the ballots. “They obviously can’t handle it. They have never been able to handle it.”